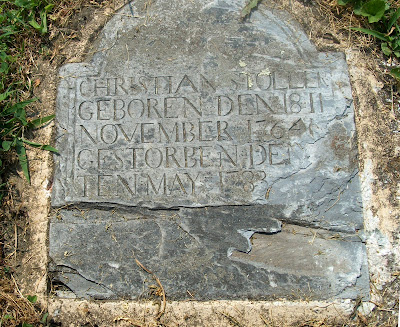 Because I'm in that kind of mood, this and my next blog post, whenever that may be, are going to feature tombstones at cemeteries.
I took this picture about 5 years ago, and it marks the final resting place of Christian Stoller, born November 1764, and died May 1783 - a short life.  One of the neat things about this stone is that it is in German, or rather it mixes German and English, using German for born and died, and the English spelling of May.  I lived in this area for quite awhile, and since I had also lived in Germany for several years, I was very aware of the German place names and road names, and the preponderance of German surnames of the people living in and around Taneytown.
The area was obviously settled by people from Germany.   The town of Taneytown was founded in 1754, ten years before Christian Stoller was born.  He died in 1783, so the last years of his life were violent ones in American history, and in North America.   He would have been the right age for an army badly in need of bodies, but I have no idea if that was the case.  He could have just as easily gotten sick, or been injured on the farm.  Baust church is 4 or 5 miles outside of town - the town's not that big now, it must have been a miniscule village in 1764.   Chances are he lived with his parents on a farm in the area.  I wish I knew.
Posted by A Valdese Blogger at 9:27 PM

Long history of the Stoller's and the Rupert's found here. Scroll way down for a mention of Christian. Actually the only mention is his burial between his mother and father. Nothing about his life...

Grace: Cool! The church is actually closer to Tyrone - a village of about 4 or 5 houses and an antique phone booth. I had forgotten about that place. The church & cemetery are a very pretty location.

There is just something about cemetaries, I like them. To me they are full of mystery with each and every headstone.