We're men!  We're men in hats!
We crawl around in caves looking for bats!

We're Men! We're men in hats!
Won't you help us find some bats!

It appears that town council elections for Valdese, NC are imminent.   I'm not sure who all's running, but I've seen signs.  Literally.

There's Frances Hildebran, with a blue and white sign that just says vote for Frances Hildebran.  There's Steve Ogle, with the same kind of sign except it's red and white.  There's Jason Banner whose sign I think is red, white & blue, and asks you to vote for him "For A Better Valdese".   And then I've seen Sandi Walker's sign, which asks you to vote for her for "Common Sense Government".  Her sign is also yellow with black lettering, thus setting her apart from rest of the field in the graphics regard.

Frances & Steve have pretty basic signs, just getting their name out there, letting you know they're running, nothing else. Old school - they probably have the same thing printed up on those funeral home fans so that people who are grieving for their loved ones can think about who to vote for in a couple of weeks.

Jason has promised a better Valdese.  My first thought is, better than what?  Better than right now I suppose, but how much better?  What does better mean? Is he going to get all the mills & factories in town churning out furniture and hosiery products and employing hundreds (perhaps thousands) of people like they were 50 to 60 years ago?  Or is he just talking about adding a traffic light where Faet meets Main Street so people can make a left turn without risking their lives.  Or is he just going to get all the traffic lights on Main Street better synchronised?   Or is he going to round up all the non-English speaking people in town and make them prove they're citizens.  I have no idea what his idea of a better Valdese is, but most likely, somone else has a different idea of what a better Valdese is.

Jason & Sandi probably assumed they were putting some bland, safe slogan on their signs, something that sounds agreeable and people would hopefully associate with their names and not really think about.   Neither considered that Pickles the Dog and I walk the mean streets of Valdese every morning, generally south of Main Street, and I see those signs.   I see them, I look closely, trying to catch the nuances of a printed two dimensional piece of small town political advertising, I wonder about them, I read between the lines, I try to figure out what they're really saying, especially if there are any "code" words in them.  Jason and Sandi's signs kind of scare me, I have no idea what their slogans mean to them, and I can easily see the sinister side of  "A Better Valdese" and especially of  "Common Sense Government".   Frances and Steve have no slogans, make no promises, could be they're just really need a job, and for no particular reason I feel a little easier about them.

Doesn't matter.  I've never met Frances, Steve, Jason or Sandi, and probably never will.  I don't know anything about them or what they stand for, which is why I pay attention to the signs.  And we don't live within the Valdese town limits, so I don't reckon I'll be a-votin' for them any how. 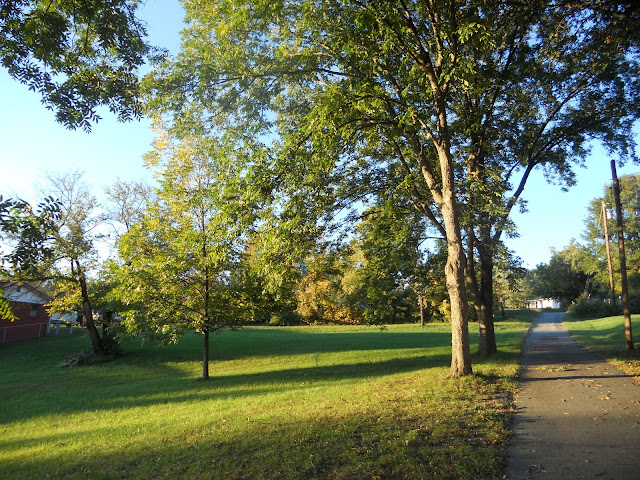 That time again, writing something just to write something.

As in most other places in the world, it is October in North Carolina, and if the wind is blowing and you're in the shade, it almost feels crisp.  Otherwise it's just as humid as it was in August, just not as hot.

I am convinced that dogs see things that don't exist, then get scared and bark at them.

Cats also see things that don't exist, however they don't get scared,  they just stare.  Nature of the beast.

Here is a short list (out of a much longer list) of foods I don't like:  butter, mayonnaise, cheese, yogurt, tomatoes, steak, peas, peaches, pears, artichokes, cauliflower, mustard, onions.

Not sure what the difference between x-factor and the voice is, but I could live without either of them.

I thought I'd make a joke about Herman Cain's 999 plan just being 666 upside down, but when Michelle Bachmann made the same joke, I was glad I didn't.   Now I'm sorry I even thought about it.

Last night I had a dream, I woke up & tried to remember it, but it just dissolved.  I could see it dissolving and there was nothing I could do.  I couldn't remember anything, and I tried hard.

I can talk myself out of mowing grass without any problem at all.  I did it today - it needed another day to dry out.  That's the ticket.

Even though I was in the Army at the time and that put a bit of a damper on things, I really liked living in Monterey, California.

As much as I disparage Kafka, I really liked the unfinished story about Blumfeld, an elderly bachelor.  How on earth could anybody think of something like that?  Where does that come from? 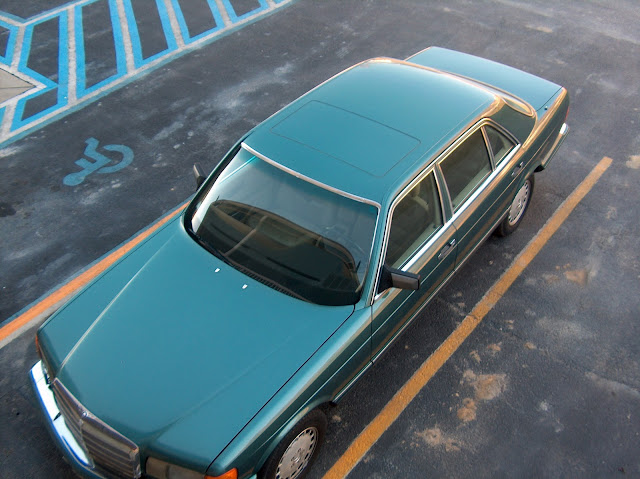 Shoveling out the Driveway

Topographically speaking, Valdese, North Carolina is not a flat place.  If there is a flat place in Valdese, it was made that way with heavy equipment.  Valdese is very close to some good sized mountains, and has some very nice views in spots, but it's actually located in the foothills region of North Carolina.  You can tell this because 25 % of the businesses around here (80% of which are thrift stores or beauty parlors) call themselves Foothills something or other.  This is not to be confused with Piedmont, which I believe is French for Foothills, but is an entirely different region, somewhat to the east of us.  Anyway, Valdese is a pretty little town with an interesting history and some interesting buildings,  and could almost be a tourist destination if the universe had aligned itself just a tad differently.  All that aside though, it's not a flat place.

Our property is roughly rectangular, almost 3 acres, sloping almost but not quite gently from the gravel road we live on to a creek, then banks sharply up toward some houses in a relatively new development.  That area is completely wooded and in the summer we can't see those houses.    We have huge trees and lots of elbow room and it's nice.  But it's not flat.

The gravel road we live on comes off a paved residential road, travels downhill toward our property then curves.  Our paved driveway comes off of that curve, continues down hill on the west side of the house then curves around behind the house.  The driveway area behind the house is about as flat as things get around here and it was made that way at some unknown time in the past, almost certainly with heavy equipment.

The problem is, it doesn't drain.  So when it rains water streams from the paved residential street, down our gravel street, down our driveway, and ends up in the area of the drive way behind our house.  It brings along with it a lot of dirt and other residue it picks up along the way, and in very short order that area of the driveway is caked with mud.  It dries out & turns into dirt, and the driveway disappears.

Now there are drainage ditches, but they're apparently just a good intention.  They've never worked, and I'm sure are only there because some permit issuing authority from the local government required them to be there so they could collect their permit issuing fee.

When we bought the place there was no indication of any kind of issue with the small part of the driveway that is behind our house.  Of course I'm pretty sure there was a drought when we bought this place.  I shoveled the driveway out once several months ago.  I started to it out again today, but decided it doesn't really matter.   Shoveling dirt from a driveway by hand is hard work, even on a low humidity day.

With the new septic system & grading done in the back yard, maybe it will drain.  But I bet it won't. 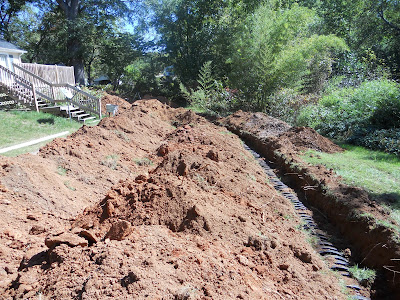 September finally broke our 2011 sales pattern, where (with the exception of June, and maybe August, but not by much), every month was not quite as good as the month before.  September exceeded August, both in Gross & Net.  To a person like me, who really knows nothing about the finer points of business, the most important number is the net - what is left over after expenses.  In September our expenses were higher than in August, so as a result even though we grossed quite a bit more in September than August, our net was just barely higher.  But still, it counts.

In 2009 we were still doing a fair amount of consignment sales.  We did a lot more before that, and while it's profitable, there's a lot more work involved record keeping wise and especially dealing with people.  People, as you know, can sometimes be difficult.  If I wanted difficulties I could have a REAL job, sitting in a cube sweating drops of blood & jumping thru hoops to meet deadlines and such.  So we decided we didn't want to do consignment anymore & by 2010 we were pretty much out of it.  As a result our sales dipped mightily for the year.  Well I think we've finally recovered and compensated for the lack of consignment, and in 2011 we're back on a 2009 pace.

September started out pretty slow, but it began to pick up during the 2nd week - maybe because school started, who knows.  As usual, what seems to determine if we have a good month or not are our photo sales - and photo sales were better than usual for the month.  Postcard & trade card sales were about average for us.

July was an absolutely dismal month sales wise, we've had two pretty good months since then, and we'll just have to see how it goes.  This eBay stuff seems to be boom or bust for us with not much middle ground.  All I know to do is keep plugging away at it.  It's the optimist in me I suppose.