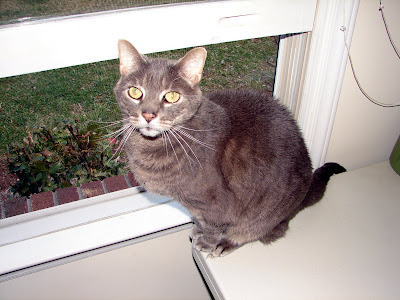 -
None of us are getting any younger. If you don't believe me, just think about yesterday, or last week. You were younger then.
-
Snowchief the Cat is almost 17 years old now. He'll reach that milestone in April, I believe. Snowchief is not in the least bit introspective, so I doubt he has any kind of notion of how old he is. But I do, and I can't help worrying about it.
-
Snowchief does all the normal things a cat does. He eats, he drinks, uses the litter, jumps on the couch, tries to eat the plants, and spends a lot of time searching for the warmest place in the house to stretch out for a snooze. He's very good at that.
-
I'm sure he doesn't realize or remember how much more energy he used to have. I don't remember the last time I saw him on top of the refrigerator. He doesn't seem to jump any higher than chair or bed level now, and I dont know if that's laziness, or if it's hard for him to do that now, or if its just common sense. It's hard to tell with a cat. He does not seem to be in any pain, and I haven't seen him miss any jumps, but he doesn't try the higher ones anymore.
-
He's loosing weight. The picture is from a couple of years ago, and he's thinner than that now. We're supplementing his regular food with canned food to try to give him some extra calories, but he's thinner than he used to be. It's nothing dramatic or alarming, in my experience, it happens to older cats.
-
He's had a lot of years, hopefully he'll have a few more. He's very affectionate, even though it may only be because his humans make a nice warm place to sleep, but still.
-
He doesn't know. I do. And I worry about it sometimes.
Posted by A Valdese Blogger at 8:39 PM

What a sweet kitty! You must be a wonderful, kind person to care so much about your animal. He's lucky to have you.

I have two senior cats, too. One is chronically sick, to boot. You'd better believe I worry about this same stuff!

Awwww... That's so hard not to worry. You don't want to loose him. May he have many more happy years with you :o)

Anon: Well the Cat's the Boss, gotta do his bidding & take care of him.

Manx: Snowchief still has his tail!

SHG: Thank you. I hate it when pets get old.

Thanks everybody for your comments!

I have two older kitties, too. They went from plump to skinny and one takes thyroid pills. I notice that they sleep a lot more, and the girl cat has a little Katherine Hepburnesque head shake.

I always think about those cats that live well past 20. Here's to that!