It's hot these days, and even tho the dog and I take our walk in the morning (2 miles, give or take), the heat and the humidity are quite evident.

We have several routes we can take, but I've found that on most occasions I'm following the path with the most shady spots.  When we pass from sun to shade the change in temperature is quite noticeable, at least to me.  Of course humans perspire differently than dogs, so I don't know if Pickles notices it as much.  But I sure do.  I do know that if given a choice of laying down in the sun or the shade, she'll pick the shade every time.  Me too, for that matter.

No matter what, when we get back from these walks, sweat is literally dripping off me, and the dog is involved in some very heavy panting.  We've both developed an after dog walk routine - I stand under a ceiling fan and luxuriate in the cool air blowing down on my sweat covered self.  Pickles plants herself right over top of an air conditioning vent.  She does that so much now that we say she's venting.

After a couple of minutes we both go somewhere else.
Posted by A Valdese Blogger at 9:35 PM 2 comments: Links to this post

I've been remiss on writing about books I've been reading, so I shall do so now.  Quickly.  I'm not going to go into a lot of details, tho.  Or worry too much about grammatical conventions. Just 'cause.

First I read "Five People You Meet In Heaven".  I can't remember the author.  It was a mystical little book about an elderly amusement park worker who died in a work related accident, while trying to save a small girl from the same fate.  After his death he meets 5 people who's lives he impacted, some of whom he'd never known while he was alive.  Basically his whole life history comes out with these people, and it was interesting.  The author's concept of Heaven though has nothing to do with religion, at least not with Judeo-Christian traditions.  You've seen the same concept a thousand times in movies & TV shows.  Heaven is not a physical place but a state of mind, and it's different for each person.  Not sure that'd past muster with a Baptist preacher.

I also read "The Summons" by John Grisham.  This was a good story, I don't think John Grisham writes bad stories, but there wasn't anything great about it.  In this book an elderly judge is dieing, and he summons he two sons (hence the title) to his Mississippi home, supposedly to settle the estate.  But he dies before they arrive, and the more responsible brother finds boxes filled with cash.  Something over $3,000,000.  His father never earned more than $50,000 a year in his life, so something strange has happened.  The rest of the book deals with the money, and has a semi strange (but only semi) twist.  Not bad reading.

Then I read Ken Follet's "The Man From St. Petersburg", which I thought was very good.   The main characters are Felix, a Russian anarchist, and Lady Charlotte, the daughter of the Earl of Walden, and it is set in the summer of 1914, in the months preceding the start of World War I.  It's kind of a spy story, but not really, and it gives vivid descriptions of British society & customs in the early 20th century.  Prince Alexsey has come to England to negotiate a treaty.  The British negotiator is the Earl, who happens to be the Prince's cousin by marriage.  Felix knows that if the negotiations succeed, Russia will enter the coming war on the side of England and France & he wants to stop that.  Not out of love for Germany, he just doesnt want Russia to go to war.  So the story is about his attempts to assassinate the Prince.  Now there is a history between Felix & the Earl of Walden's wife, the result of which was Lady Charlotte, tho the Earl doesn't know.  And Lady Charlotte is coming of age and is expressing a lot of interest in politics, the suffragette movement and society as a whole, much to her mother's dismay.  Felix and Charlotte meet, and she is drawn into the web.  I liked this book a lot.

And I also read "Precious Victims" by a couple of authors who names I can't remember.  This is a true crime book, and tho it told an almost unbelievable story, I thought it was very poorly written.  There were a ton of people in the book, so that was hard to keep straight, and many times they were referred to in one sentence by their first name and the next by their last name, so that just added to the confusion.   The book tells about a couple in Illinois (not to far from St. Louis I gather), Robert and Paula Sims, who had three children in the 1980s.   Both daughters were found dead, and Paula Sims, who gave unbelievable stories in both cases, was convicted of murdering the 2nd daughter.   That's about all I want to say about it, it was pretty tedious.  And not Kafka tedious, but bad writing tedious.  It looked like it was written in a hurry, and could have used a bit more editing.  And it could have been a lot shorter.

Not sure what I'm going to read next.
Posted by A Valdese Blogger at 9:50 PM 3 comments: Links to this post 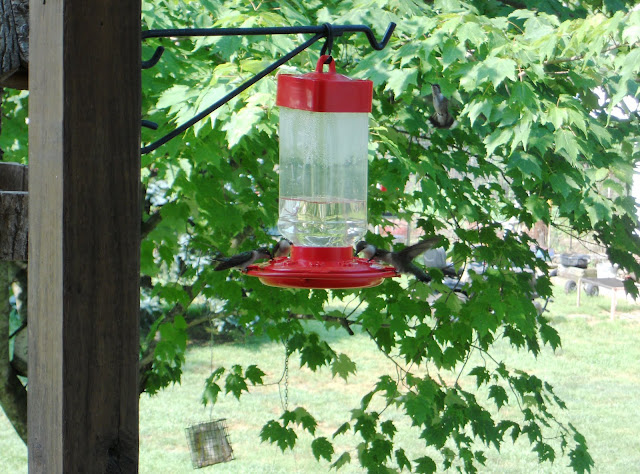 I have discovered that no matter where you go, there's almost always a road nearby.
Posted by A Valdese Blogger at 4:47 PM 4 comments: Links to this post 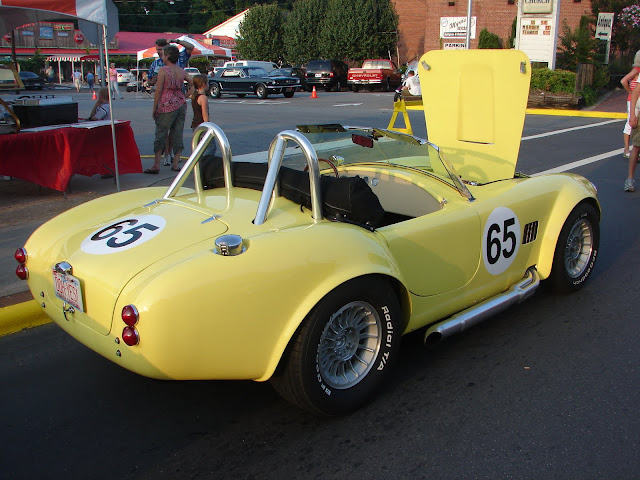 Birds in the Birdbath 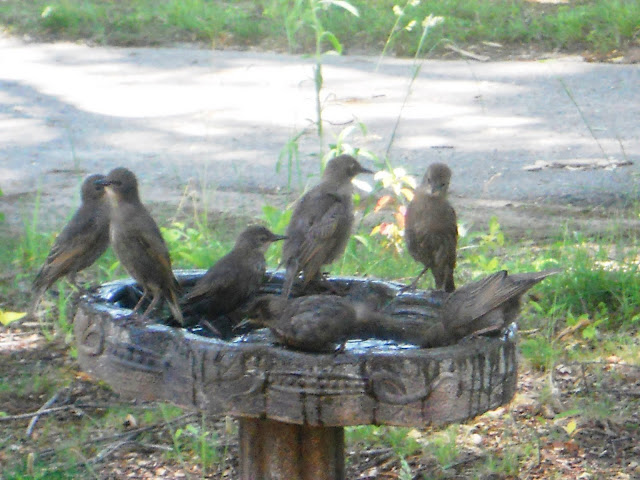 This is a bunch of birds in our little bird bath, just outside a window in an area shaded by a large oak.  I took several pictures, but I had to take them thru the window because they'd skedaddle as soon as I opened the door, no matter how quietly.  I think there are 8 in this picture, but there had been as many as 12.

It's unusual for this many birds to be in our small bird bath at one time.  Normally it's just a couple at a time, sometimes with others waiting for their turn.  But these guys were having a party in there, literally drinking & splashing out almost all the water.  There were one or two who seemed to be trying to take charge of things, but they weren't having much luck.

I think these were juvenile delinquent type birds.  I think they hatched not too terribly long ago and are the equivalent of teenagers in the bird world. I think they're all brothers, sisters & cousins.   In a month or two they'll be all grown up and burdened with their bird responsibilities, scatter to the wind and won't have time frivolities like seeing how many birds can pile into a bird bath.  This has been going on for a couple of days, I don't expect it to go on too much longer.
Posted by A Valdese Blogger at 10:09 AM 8 comments: Links to this post

Well April is no longer our worse sales month this year.  May now holds that dubious honor.

Our business is really divided into three sections, 1) postcards 2) photographs 3)Victorian Trade Cards.  We sell other random items occasionally, but the core of our business by far is the sale of single postcards (as opposed to postcard 'lots') and old photographs.  Although I consider Trade Cards to be a main part of the business, postcards and photos is where we concentrate most of the energy.

The trade card sales data in April is a tad askew however, because one of our cards sold for a lot of money.  It got multiple bids, and kept going up and up.  I remember when it hit $40.00, we looked at each other and wondered what these people knew that we didn't.  It went a lot higher, and as a result the we got quite a bit more money for Trade Cards in April than normal, even though we sold pretty much the same number of cards we always do.  Honestly, I would have been happy with $5.00 for that card, and I still don't know what was so special about it.

So in May, postcard and photo sales were roughly equal (actually a little higher) than in April, but Trade Card sales were not.  Hence our gross sales were somewhat lower.   Also, as luck would have it, our business expenses were higher in May than in April.  It all combined to make May a dismal month net sales wise.  April was a bad month, May was worse.

Now a serious question is why have April & May been so poor?  I'm keeping my eye on "Free Shipping".  We recently expanded it.   Not the best timing perhaps - the post office increased their rates - but eBay is implementing changes which make offering Free Shipping advantageous.   However I think this may be a culprit.  Shipping costs are consistently our 2nd highest monthly expense, & we'll have to watch this closely.  If sales don't increase as a result of free shipping, we lose money.

The first 4 days of June have been very good though, I have no idea if it will hold or not.  So far the best month this year has been January.
Posted by A Valdese Blogger at 11:19 AM No comments: Links to this post 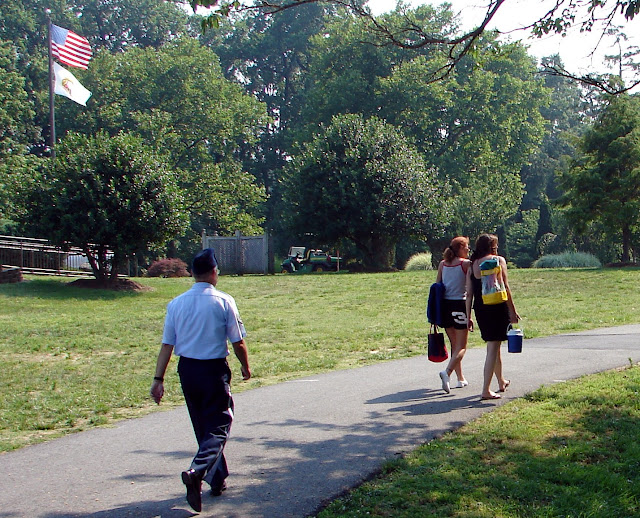