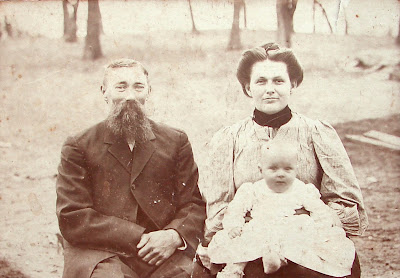 We've had this little picture for a long time - I'm not sure where it came from, most likely it was in an auction box lot. We've had it for sale way back when we had a store, and it was in a booth we rented forever. We don't have a store or rent a booth anymore, so now it's on eBay. If you're interested just follow the link to our store on the sidebar, then look in photographic images.
It's an interesting little picture, obviously 19th century, altho I don't know exactly when. Everybody, right down to the baby, has a hint of a smile, which is unusual for pictures made in that era. I've spent a lot of time looking at this picture, just trying to figure out what was going on, what the relationships were. The assumption is that it's a family, husband, wife, child - but that's just an assumption.
The woman looks physically bigger than the man - but that could be an illusion. The picture was taken outside, she may be a little closer to the camera than the man, or perhaps the ground isn't quite level. Also the man has close cut hair, while the woman's is swept back and extends out. The sleeves of her dress are kind of billowy (is that a word) too, and there's that dark cloth around her neck. Everything she's wearing makes her look bigger than she probably is.
The man of course has a heck of a beard and mustache. Though you can't really see his smile, you can see the amusement in his eyes. Did they just share a joke? Did the photographer say something funny? I wish I knew.
There is no information about these people on the picture. The only thing I'm sure about is that none of them, including the baby, are still living. I have no idea, but I imagine that baby grew up, had a life, got married, had children and grandchildren, perhaps great-grandchildren, and died as a very elderly person in the 1970s or so.
I wonder who they are and what they did. They mattered to somebody, they lived. They were young and strong when this picture was taken. They probably worked very hard, physically demanding jobs. They are most likely responsible for people who are living now, more than 110 years later. I'll never know. I'll have to be satisfied with wondering.
Posted by A Valdese Blogger at 9:15 PM

Interesting photo! They're outside, I wonder how long the exposure must've been. The man and woman's faces are clear, can see blur in the baby (motion)... and background is blur (large f-stop?)

I think the wife looks bigger because of the style of clothing. I too see the man and his smiling eyes :) Beard looks funny to me though.

I love old photos and wondering about the story. I found several along with a postcard album. I was able to piece together a story of sorts.

Maybe the man has very long legs, and the woman shorter ones. they look a very pleasant couple.

Ms. O.D.: I think you're right about the f-stop, the man and woman are in sharp focus, the baby is fidgety (imagine that), and the background is out of focus. I thought It might be a studio picture at first, with the background some sort of back drop, but I don't think so. The beard does look odd.

Sheila: It looks like they were happy, at least when the picture was taken. I have no clue what their story is, there was nothing esle to go on.

And it could just be that the woman was physically bigger than the man - always a possibility.

Well, we assume the picture was made in N. C., since we bought it here. That man has blue eyes; you can tell if you enlarge the photo. The baby has dark eyes, as does the mother. I love that baby's little face! I hope she had a happy life.

theh dn't make beard like they used to, unless you are a zz top fan!

Ivanhoe: It's good to wonder.