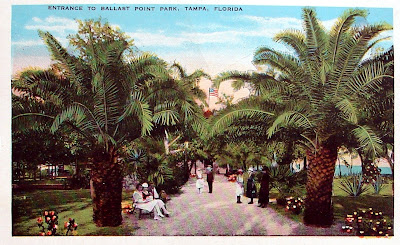 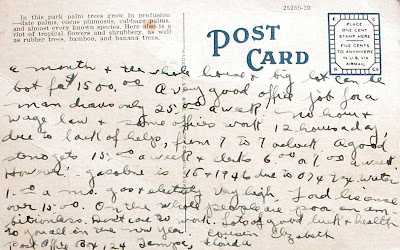 I don't know if anybody collects postcards because of what someone writes on them, but if they do, this is a good one. The front of this card is a scene from a park in Tampa, Florida. It's a "white border" card which means it's circa 1920's. This fits in with the clothes people in the picture are wearing, the stamp box etc. I'm confident in estimating the age of this card at 80 + years.
-
The back of this card looks like the end of a longer message this person was writing. I've seen that lots - people bought cards and kept little diary entries on them, or would write messages to other people and mail them in an envelope. The content of the message is interesting, for a former history major such as me. It describes typical wages, cost of living & and a bit of social commentary, I'm assuming about Tampa during the period. Keep in mind, this would have been between WWI and the Great Depression.
-
It's hard to read it all, penmanship being what it is. But some of the interesting things are: a house and a large lot can be 'got' for $1500; a very good office job for a man pays about $25.00 a week; a steno (secretary I think) gets about $15.00 a week, and a clerk $6 or $7 a week; She gave the price of gasoline, but I can't quite make out what it was. If I could, I could probably pen down the date a little closer. She writes that there is no wage or hour laws, so many offices work 12 hrs a day, from 7 to 7. That's interesting - I bet anything this person was a transplant from the north, where things were more unionized, and labor laws governing hours and wages more common. She also described the people as "on the whole...poor and ambitionless. Don't care to work." She probably had lots of money.
-
Anyway, the card itself has some creases and is physically not in the greatest shape - but what was written on it was very interesting.
-
Exciting News! I clicked the picture to make it bigger and stared and stared and I think I figured out the gas price. It's my best guess, anyway. I believe the line in question reads "gasoline is 18 & 19 cents due to a 07 cent tax". The writer used the cent sign, I dont want to take the time to figure out which combination of keys produces that on my computer, so I just wrote it out. Its still possible I'm misreading it - I welcome any suggestions. I googled gasoline prices, and all I could find was that Standard Oil raised gas prices in San Francisco to 18 cents a gallon in 1916. I think 1916 is a little early for this card, but heck I dont know. WWI was going on in 1916, its possible prices went up, then went down again after the war, then started going back up again in the 1920s, but I'm just grasping at straws. My nose was stuck in medieval history in college, so to me, anything John D. Rockefeller did would be decidedly modern.
-
I did learn something tho, and based on the wages and working conditions described by this person I find it quite believable. Adjusted for inflation, gasoline prices in 1920 would be equal to paying $10.00 a gallon today. So, if the price was 19 cents a gallon, and you're only making 6 or 7 dollars a week, chances are you do not own a car. I'm not even sure $25 a week would be enough. I'm not sure I buy that adjusted for inflation stuff completely. $3.00 a gallon seemed like a lot to me.
Posted by A Valdese Blogger at 5:22 PM

Valdese,
I had fun making out the postcard's cursive writing... it's like whole different world.

This postcard is so interesting. I love taking a peek into this person's life. Thanks for sharing this one :)

I think it's 1920's, too, because that's when white borders were popular.

Ms. O.D.: Thanks for the link, I'll check it out. Prices probably varied from location to location, but 18 cents sounds right for the 1920s.

Dori: I agree - I thought the wages & prices she described were very interesting. I eat stuff like this up.

What a great piece of history. Thank you for sharing it with us :o)

Ivanhoe: You're welcome! It's quite interesting.

Ivanhoe: You're welcome! It's quite interesting.