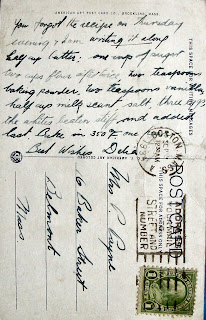 I came across this old postcard that had a recipe on back, but since both the sender & receiver knew what it was for, the sender did not think to enliven later generations.   It's postmarked Boston, Mass., Sep 7, 1934, and the front is a picture of Jamaica Pond in Brookline, MA.   It was sent to an address is Belmont, MA.  Click on the picture to make it larger (at least that works for me).

I'll transcribe it here so maybe someone can figure out what it means.   It'd be cool to try to reproduce it.  Perhaps.

You forgot the recipe on Thursday evening & I am writing it along.

I think it's a cake of some kind, but I'm not positive.  And if it is, I'm not sure what flavor it would end up being, but most likely some form of vanilla.  I'm also not sure what the word after "milk" is.

I liked the interesting turn of phrases in it - "I am writing it along", instead of I am sending it along.   And "Bake in" instead of bake at.

Anyway, this is a 75 year old recipe for something, with no need to mention how much salt was required.  In I think a lot of stuff in this recipe is "assumed".  No need to explain something that everybody would know.

Chalk up another one for postcards.

How extremely interesting!
I would love to try to reproduce this, but the scant part has me puzzled. I googled it and found a variety of answers, not sure what to believe.

Very interesting post. I love things that make you think about people in the past.

"scant" in a measurement, like this recipe, means just that much, maybe a smidge less. We old folks who bake know what it means. You young uns'

Oh and as to the salt, 2 teaspoons of baking powder would take 1/2 teaspoon of salt but I believe it mentioned 2 cups of flour, so I would go for a whole teaspoon of salt - what the heck, won't really hurt it. LOL

Heather: Yep, I didn't know what "scant" meant in this context, wasn't sure if I was even reading it right.

Grace: Thanks for the info! I'm not a baker so I had no idea. Very good - thanks!

Well, I can try to make it for you, but that's an awful lot of ingredients! I like 5 or less.

Love this! Yes, it sounds like vanilla cake. You should make it and post back about it. Now I want cake!

Maybe angel food cake because of the whites folded in last. But a very cool find.

PA: If you want to tackle it I'll take pictures!

Kathy: Good idea. But I'm not used to planning that far ahead. But maybe with PA's help it could happen.

Grace: PA & I thank you for calling us young 'uns. As time passes, fewer and fewer people call us that.

here is what i got from trying to read it

you forgot the recipe on thursday evening so i am writing it along, half cup butter, one cup of sugar, 2 cups flower sift twice, 2teaspoons baking powder, 2 teaspoons vanilla, half cup milk, scant salt, 3 eggs the whites beaten stiff and added last, bake in 350 degree one hour best wishes delia

i have no idea what the recipe is for though, i wish you could google entire paragraphs, maybe that would help

Brian: Howdy! I thought there was a comma after scant and before milk. But either way, it didn't make any sense to me at the time.

I wanted let you know you have a award waiting for you on my post.