Things we did today 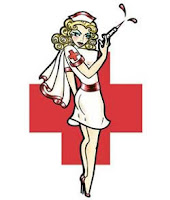 The highlight of the day without a doubt was the flu shot.  We went to a Walgreens drugstore in Hudson, right on Rt 321, and we took the scenic route up thru Rhodhiss road.  We got to take all kinds of strange turns in the Alfred Hitchcock like small town of Granite Falls along the way.

At any rate, we managed to get a flu shot & it was even covered by our insurance. This year's shot included the "pig flu" shot that was so scarce last year (and which I never did get), so we should not be oinking any time soon.  (I said OINKING, pay attention).  And of course we spent some money on the way out, which I'm sure is one of the reasons they offer flu shots there in the first place.   We were classic flu shot customers.

On the way to get flu shots, we took advantage of early voting in North Carolina, voting at the Connelly Springs Town Hall.   We were approached by a couple of ladies while in the parking lot - and one gave us a sheet telling us all the conservative candidates to vote for.   They may have technically broken the law by approaching us in the parking lot - you have to be a certain distance way from the polling station, and that may have been too close - but they looked like a cross between Aunt Bea and your favorite grandmother, so I doubt the Burke County police will slap them in the hoosegow any time soon, unless Barney Pfife shows up.  They were very nice, and we thanked them, but I'm pretty sure I didn't vote for anyone on their list.

Today we also dealt with installing a new DVR box, which was a lot more difficult than it should have been.  But basically all that had to be done was put the TV input (or is it output) cord on the correct post & pull out and re-seat the smart card.  Took a few minutes to figure that out, especially the smart card.  But now we are back in the 21st century.  We can once again DVR programs, pause live tv and skip the commercials.  Skipping commercials is important.  It's how I get past all the political ads, and in a month or so, it'll keep me from going crazy because of the Christmas ads. The old box suddenly quit working yesterday, and they got the new one to us today - pretty quick.  We have to send the old one back, so that'll be fun to deal with.

The day started with a dog walk, as usual.  We took the long way up to the cemetery, which means I got to walk up lots of hills, but only one way.  Not like in the old days when you had to walk up hills both ways, thanks of course, to modern engineering.  The last few days have been very pleasant, warm days, cool nights, clear skies, and the mountains are quite visible.  The leaves are changing, and things are very beautiful.   I hear it's going to rain though - fine with me, let it rain.  Just means Pickles and I will get wet when we go for our walks.
Posted by A Valdese Blogger at 7:31 PM

It always sounds like you lead a very mellow life...

I am just amazed, as I missed seeing you take a picture of the pharmacist as she gave us tho shots. However, you apparently did and posted it here! Yes, it was quite a day. Complete with a huge pecan dropping on the truck when we went to McDonald's to get our chicken sandwiches. It sounded like a bomb going off! Survived flu shots and voting and installing a new DVR receiver to be killed by a bomb in Valdese NC.

Grace: It IS kind of a mellow life. It is indeed. Mostly.

Patti Anne: You know as well as I do the pecan didn't just drop - a squirrel threw it at us.

Squirrels in Valdese are known to be well armed, trained vigilantes. They will fight to protect their stash of pecans. Everytime we go under those trees, we are taking our very lives in our hands. It's a wonder we make it through fall. Then, this morning when I took her out for her station, a whole bunch of squirrels threw acorns at us. It was veritably raining acorns.

veritably. adverbial form of veritable:
Meaning: Being truly so called; real or genuine: