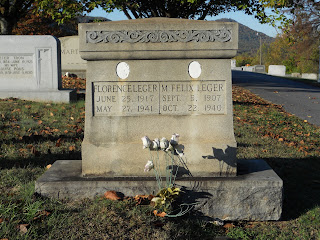 First I want to apologize in advance to any Leger's living in the in the area - I mean no disrespect, none at all.

One of my frequent dog walks is what I call the cemetery route.  It's up on a hill, it has well defined walking areas, it's peaceful up there and you get beautiful views in every direction.  It's a nice walk.

I pay attention to the headstones and frequently wonder about the lives of the people buried there. One that has repeatedly drawn my attention, and my wondering, has been the marker for Florence and Felix Leger, who both died young, within 7 months of each other.

First, I assumed they were married.  They share the same last name and the same headstone, Felix is somewhat older than Florence so it fit nicely with preconceived notions and assumptions.  But you wonder what could cause a husband to die just past his 33rd birthday, and a wife to die 7 months later a month shy of her 24th birthday?  My thoughts were accident or disease, not entirely original thoughts, or even hard to think of thoughts.  Anyway, I've been walking up that way for some time now, and I've frequently wondered what happened, but I just let it go.

Well, I mentioned this to Patti Anne and she did some quick research.  Her research turned up some interesting things and some discrepancies, as research often does.  Had we the money and inclination (we probably do have the time, now that I think about it) we could research this much further and maybe find some definitive answers to things, but I believe what Patti found is good enough.

Apparently Florence and Felix were not married - they were brother and sister.  Felix died of kidney disease, and Florence died in what must have been a horrific automobile accident, so their deaths were completely unrelated, just one of those terrible random tragedies that sometimes strike families.

First, back then all these documents, census entries, birth & death certificates etc, were hand written.  And as I recently found when one of my older relatives died, there is sometimes disagreement among relatives on the actual date of birth, so a year's discrepancy on a headstone is easily explained.  But the first initial I wonder about.  Is it possible for someone to mistake a "W" for an "M"?  Is is possible for someone to write down Wilburn in a census, when perhaps his name was really Milburn?  Sure it is.  Or could someone had made a mistake when carving the name into the marker?  Maybe "W. Felix Leger" was written, but whoever was doing the work read the "W" as an "M".   Maybe the template was turned upside down.

The second possibility is all our assumptions are wrong.  Possible, but I don't think so.

I find reading gravestones an interesting and fascinating thing to do..

Blues: Thanks for commenting. I've walked thru that cemetery for a couple of years now, and there's plenty of grave markers I've wondered about.

How rare is it for an adult brother and sister to share a plot? Kind of strange, I am thinking (and resisting the urge to add my usual smarty-panted "but maybe not in Valdese"!).

I love old records, words that count for something.

Bianca: it's unusual even for Valdese.