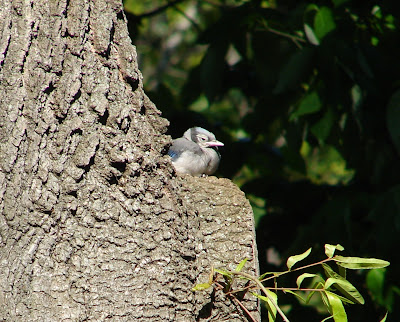 This is a picture of a baby Blue Jay who had somehow managed to get out of its nest. It was taken sometime last spring. It was too young to fly, but it could hop and climb trees and that's how it got to where it was. Its parents were very protective - they were always close by, they fed him, and kept an eye out for dangers. They kept a close eye on us, that's for sure. The last I saw the little guy he was hopping toward the forest at the edge of our back yard. His parents were on a couple of low branches just inside the forest making a lot of noise. We like to believe the little guy survived. There were a lot of Blue Jays flying around last summer, and we like to think one of them was him.
Posted by A Valdese Blogger at 9:21 PM

He is so cute! I sure hope he made it. I did not see a blue jay for a while around here. We had lot more cardinals then usually last season though.
Have a great weekend :o)

Aw, he's a precious little guy! I'm sure I saw him around here last week. There were a lot of cardinals, blue jays, doves and squirrels playing in the snow one morning - one of those jays had to be our little one!

Ivanhoe: Hope he made it too - his parents were sure trying hard enough!

Trisha: There's a good chance it was! We should put out some bird food, dontcha think?