Because I can't think of anything to write. 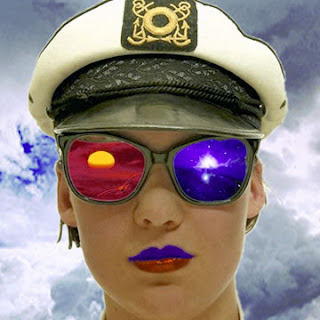 First, before I offer any explanation for the picture to the left, I need to let everyone know that the Mr. T gadget is gone. I never really warmed up to it, and it looked like it was getting ready to die anyway. Apparently I'm a gadget killer. I'll be surprised if I ever mention Mr. T in this blog again.

Ok. I'm in one of those situations where I cant think of anything to write, but I want to write something. I feel the urge. I feel the need. Usually when this happens I'll post one of my "stuff around the house" posts, but that requires that I take a picture of something, and I don't FEEL like it. I'm in a lazy, unmotivated, uninspired mood.

So I just grabbed a picture off my computer. I've had this picture for a long time, stuck in a folder along with other pictures of that ilk. I have no idea where it came from, how I came to possess it, or what it means, or if there somebody out there who actually created it and cares. I just thought it was interesting, and frequently that's the only reason I need to snag something and stick it in a folder, knowing that months later I'll probably look at it & think about it again.

Sometimes I make up histories for & motivations behind stuff like this, but I haven't for this one. I just like to look at it every now and then. I like the colors.
Posted by A Valdese Blogger at 8:23 PM

Weird how you gadget keep dying. At least you weren't attached to that one.

What a strange pic! My first reaction to it was "WTF?".

I also snag pics cause they are cool or interestingly strange.

Mr. T just get no respect at all.

Heather: Yes, it is strange about my gadgets. I really do miss the weather one. WTF is as good a reaction as any to that picture. Ilk just means I have a lot of semi-similar stuff. Thanks for the comments!

Why do we never hear "On The Wall", always "Off The Wall"?

If we knew what we were doing, it wouldn't be called research - Albert Einstein

I have been through some terrible things in my life, some of which actually happened. -Mark Twain

My mother said to me, "if you become a solider, you'll be a general, if you become a monk, you'll end up as the pope." Instead, I became a painter and wound up as Picasso. -Pablo Picasso

Choose well, your choice is brief, yet endless. -Goethe

Marta says the interesting thing about fly-fishing is that it's two lives connected by a thin strand. Come on, Marta. Grow up. -Jack Handey