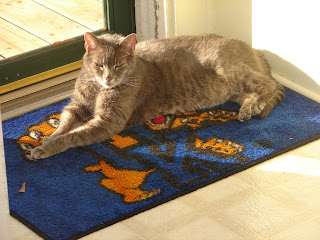 This is Snowchief the Cat back in 2007, soaking up some sun, hanging out on our University of Kentucky floor mat I won at a family reunion auction. He's lost quite a bit of weight since then.

Snowchief is around 18 years old, give or take. I brought him and a brother home one day back in April 1992 - a woman at work had rescued some kittens who had been living under her deck, and I took a couple of them. He was a young kitten, I could have put him in my shirt pocket. He grew to be a good sized cat.

He still has a appetite, still uses his litter box, still seeks out the sun and other warm spots, still jumps on chairs, is still quite affectionate. But I'm worried about him. Even though he eats, he vomits a lot. He is much thinner than he used to be, and is not quite as sure footed. He looks like an old cat. I can feel his bones pressing against his skin when I pet him. It's been a long time since he attacked my toes. I don't think he's in pain, but I don't think he's well, either.

Animals die, I know that, and Snowchief is old. I've never had a pet as long as I've had Snowchief though, so I'm really dreading it. I don't want him to suffer, but I'm not sure how I'd know if he is.
Posted by A Valdese Blogger at 1:38 PM

We will know when it's time. I promised him I wouldn't let him stuffer. Oh, it is such joy to love and such pain to lose a beloved. I love that little guy!

I hope Snowchief is around for a long time -- I've always clung to those stories of cats that live past twenty. We lost one cat in the summer and our other old kitty weighs about as much as a piece of paper now. With Sidney, I think we should have done something sooner. Zoe is still very spry and her blood levels have been ok, so we'll keep our fingers crossed all around.