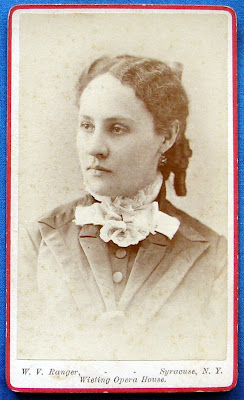 I got a lot of the technical information about CDV's from a site called ancestorville.com.

Carte de Viste (CDV) photographs are small, about 2 1/2 X 4 inches, first developed in France in 1854, and introduced to the United States in 1859.   They were albumen prints developed on thin paper, and mounted on heavier cut cardstock.   During the US civil war period and afterwards, they were extremely popular, and for the first time allowed the masses to send their "likeness" through the mail.  The cards were produced, sold, traded and collected by the millions in Europe & North America.   Frequently photographer information would appear on the back, or just below the picture.

They were contemporary with the larger "Cabinet Cards" but began earlier & ended earlier.   If you have a CDV, there is a good chance it's 1880's or earlier.

I like CDV's.  Like the cabinet cards, they are normally formal studio photographs, and you find yourself looking at a image of a living, breathing, human being who has been dead and gone for a long, long time.    Some of them are very interesting.  In some of them you can even get a feel for the attitude of the subject.

The woman in my example is young and looks to be healthy and strong.  She was most likely married, because her hair is up - I think that was a 19th century thing.   By the time WWI rolled around, she would be older, if not elderly, almost certainly a grandmother, with a bunch of grandchildren who thought she was born old.  They would only know her as old & most likely frail.  It's possible she could have lived to the 1940 time frame, but most likely not.

I also like CDV's because they are small, and from a purely logistical point of view, you can keep a bunch of them in a very small space.  They are also easy to mail, with very predictable mailing costs.   I've not had quite as much success with CDVs as I have with Cabinet photos, but they show promise.

As with cabinet cards, I'm still learning the ropes.  I still don't have a handle on exactly what my customers are looking for, but I will.  I'm still learning terminology - until I started writing this post, I didnt know what "albumen" was.  When you set out to sell photographic images, there is a lot to learn.