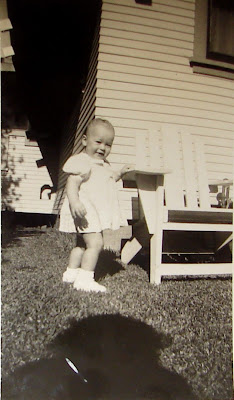 A month or two ago Patti Anne recorded a documentary on the ol' DVR called "Other Peoples Pictures".  It was about snapshots & snapshot collecting, and the people who collect them.  I was hooked.   I have always liked pictures, and I had heard rumors in the past of the strange offbeat types who collect snaps, but I failed to grasp the reasons & possibilities.   Which is strange, given my tendencies.   I think people just have a tendency to keep on keepin' on, and sometimes fail to comprehend the possibilities outside their routines.   Perhaps that's why it took me so long.

The documentary was an eye opening experience.  Once again it brought home to me that people collect things for the oddest reasons.  Well, maybe not so odd.  When you understand, it's not odd at all.

Snapshots are a gateway to art.  Plain and simple.  The people who collect snaps are looking for art.  99.9999 % of this snapshot art is unintentional, created by people with instamatic cameras of one form or another, who for the most part have no idea how to handle a camera, who are not in the least artistic, who break all the rules of photography because they don't have a clue what they are.   They are about as far away from Ansel Adams as anything could be.

It's ironic then, that the people who collect these things are frequently very artistic, and see art in things that most of us would see as a mistake.   The photographer's shadow in the foreground? It's not a mistake, it's art.  A hand in front of the subjects face?  Again, it's art.  The subjects head cut off?  You guessed it - art.  Part of the picture cut out by a jilted girlfriend?  More art.

In the picture I used to adorn this little post, the photographer's shadow is in the foreground. It's possible that it is the shadow a woman with a 1940's or 1950's style hat.  But look a little closer, and it could be a robot from an alien world sent to earth to capture the little baby and take it back to the mothership.  You just don't know.

You can argue about the artistic merit of such things, but here's one thing I think we can all agree on.  Art should make you think.   I've seen lots of snaps that make me think, and I'm sure the photographer was just trying to take a picture without doing too much work.

Snapshots are great.  I love them.  They are by far my favorite of everything.  But I'm still not sure of the demand.  So far of all the photographic media we sell, the various types of postcards, cabinet photos & CDV's,  Snaps have been the least successful.   Maybe that will change in time.

Talk to me in a decade or so.