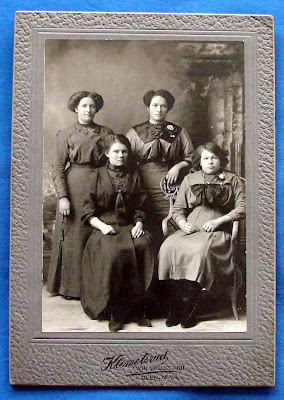 You could write a book about what I don't know about Cabinet Photo's.   I've seen guides that say a Cabinet Photo is always about 4 X 6 inches (sorry, all you metric guys are just gonna have to figure it out), but distinctly remember seeing an expert on "Antiques Roadshow" (I watch it 'cause Patti Anne wants me to, honest) describe a panoramic photograph as a cabinet photo, and it was about 6 FEET long.  So I don't know.  I never trust the word "always", because there are usually exceptions.

However I do know this.   Cabinet Photos became popular in the late 19th century, I believe late 1860's, which would make them post civil war.  I'm not sure when they stopped calling them "cabinet photo's", or even why they called them that in the first place.  But my assumption is that the vast majority of the pictures are from the late 1860's to about 1900.  Give or take.

These pictures are mounted on a cardboard backing.  Sometimes just a single matting, sometimes, more elaborate.  Many times the photographer information is printed on the back, or on bottom, below the picture.  I feel lucky if someone wrote a name and a date on the back.   I don't know if it makes the picture more collectible or not, but I like it.

The classic cabinet photo size is 4 X 6 (in reality 4.25 X 6.5 or so), and to me that is the size of the cardboard backing.  Usually the picture is a bit smaller, but not much.  Sometimes it is significantly smaller.

There are pictures from the same period, mounted the same way, that are much larger.   I'm not sure what to call these - I've been calling them cabinet photos, but I might should reconsider.

These photographs are almost always formal studio pictures.   Sometimes it's just a head, sometimes its the whole body.  Frequently it's family groupings, and of course, babies.

At this point in our photographic images foray,  cabinet photos have been our most successful sellers.   Having noted that, however, I must admit that I don't know why.   I don't have a handle on what people are looking for yet - I'm confident I will as I gain experience,  but for now it's a bit of a mystery.  Are people more interested in the image, or the photographer who took the image? Or the location of the photographer's shop?   If they're like postcards, there are almost as many reasons for collecting them as their are images, and I have to learn all these things.

Almost all of these pictures are of people, and I find people very interesting to look at.   19th century people, usually dressed in their finest.  It is just a very minute look into their lives, but I dig every detail out of it that I can.   I look at them and find them fascinating.  That works for me, but I'm not doing this just to entertain myself.  I need to know what my customers are looking for.  I'll get there.

I think my mother has some of these back at Czech. They're of my great great parents. I did not even know that they were called cabinet pics. Were they placed on display in cabinets? :o)

Ivanhoe: Could be - I'm not sure why they're called cabinet cards either. Their time frame is late 19th century & they are usually in the 4 X 6 (inch) size range. I like 'em.