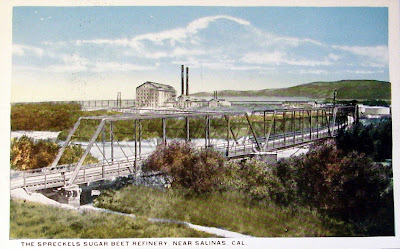 White border cards date from WWI era (I like to think 1918, but could be a year or two either way) to the early 1930s.  They have a flat non-glossy finish, and of course the white border around the picture.  These cards represent an overall drop in quality from the cards which came before them (the early 20th century cards).   The main reason the border is there is because the printers didn't print the image all the way to the edge - this was to save ink.

Think of the cartoons and how they were drawn & all the detail that went into them in the 1940s & 1950s, then think of the 1970s era cartoons.  That's similar to the difference in printing quality between the early 20th century cards and the white border.

Like other postcards, the white border subjects could be anything under the sun, but seems like buildings and landscapes predominate.

My example is an industrial site near Salinas, California, and I chose it because it brought back a memory to me.   When I was in the Army, I had a rather long and arduous advanced individual training (AIT) at the Presidio of Monterey.  Salinas is not far at all from Monterey, but it might as well be in a different world.   Monterey was beautiful, right next to the ocean, very pleasant in the summer time, my barracks was up on a hill with a million dollar view.  If I hadn't been in the Army, I probably would have enjoyed it a lot more.  Salinas, on the other hand,  was surrounded by industrial agriculture, and even though it only a few miles inland it was very hot compared to Monterey.  It looked like the kind of place people would leave if they could.  At least the part I saw.   The communities are geographically close, but may as well be on different planets.

What does this have to do with postcards?  Well if I tried hard I could make up something, but in reality, not much.  It just got me to thinking.

Anyway, many linens also have a border around them, sometimes it's tan, other times the border is white.  More than once I've thought a card was a white border, and it turned out to be linen, and once I didnt catch it until someone bought the card.  I let them know immediately and offered a refund, but the person really didn't care - he wanted it for the subject, not for the card type.

Even though they may represent a bit of compromise and lowering of standards, these are old cards, they can be quite collectible, and I'm always happy when I buy a bunch of cards and there are some white borders in the group.