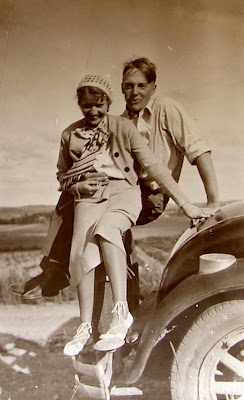 These posts might be a bit more coherent if I actually thought about what I was going to write before writing it.  As it was, I just asked Patti Anne what she thought I should write about next, so this is it.

It was either late last year or very early this year that we decided to start selling photographic images.   It fits with the kind of stuff I like anyway - visual.  However, this is not a decision to be taken likely, eBay tycoons that we are.   I don't know how much if any overlap there is between people who collect postcards, and people who collect photographic images.   I suspect there is very little overlap.

I'm very familiar with postcards, I'm comfortable with them.  I know how to go about pricing them, rating them, and I'm confident that over time they are profitable to sell.    I've even developed instincts about what is likely to sell and what is not likely to sell, at least as a class or group.  I have none of that confidence in photographs, in fact I'm still learning all the terminology.   In short, we are still very much in a learning curve when it comes to these items.

So, when we start plunking down dollars (even if it is just numbers out of a PayPal account) for inventory that is unproven in my experience, instead of putting those dollars toward something that is proven and that I'm quite comfortable with, it's a big deal.  It's a risk.  It's not a fortune, but it is significant.  This money could easily be lost.   But, the hope is that the investment in photographic images will pay off with consistent sales, hopefully at a bit higher prices that postcards go for, and will diversity our listings.  We shall see.  Right now, postcards are still king for us.

Cabinet Photos seem to date from the 1860s to the 1920s.  These are decent sized photographs, usually mounted on cardboard, and many times with the photographers information on it.  Sometimes people write information about the subject on the backing, but usually not.  These are mostly formal, studio pictures.

CDVs are small photographs, also mounted on cardboard.  All the ones I've had have been 19th century photos, usually formal studio pictures.  CDV is short for cart-de-viste, and I think people traded these.

Snapshots are informal, candid, usually black and white photos, and they start showing up whenever instamatic cameras, 35mm film became popular - from the 1920s-30s on.

Snaphsots are by far my favorite, but they are also by far the type of photographic image I've had the least success with.   Ironic, nicht wahr?

So, the next 3 eBay related posts will be about these types of photographs.   I suppose.

Thank you! That is one of my favorite snapshots. They really look like they're having fun.