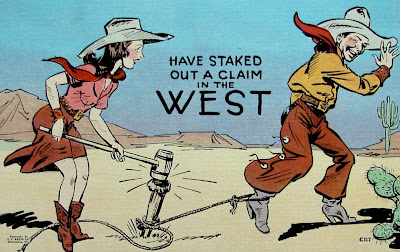 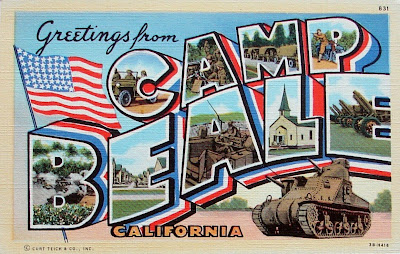 They were printed on rough stock paper, usually you can see criss-crossing lines.  They are the same size as the chromes, and were created between the very early 1930s to the very early 1950s, so there is some overlap with the standard/chromes. Their subject matter was pretty much anything under the sun.   Unlike the chromes where the colors seem to more or less reflect reality, the coloration of the linens is somehow different, perhaps just a little brighter than normal.

The two cards I've displayed are both typical and atypical of linen postcards.

The "Staked out a claim" card is a comic, but it is also considered (by me at least) "cowboy/western motif".   When you list a card for sale on eBay, you have to choose a category - and this could rightfully go in either comic or cowboy/western.  You could pay extra and put it in both, but it's usually not worth it to do that.  So you go with your feeling, and in this case I put it in cowboy/western.   Its published by E .C. Kropp out of Milwaukee, a fairly well known publisher.  I don't know the exact date, but it looks in the 1940s era to me - its a 60 to 70 year old postcard

The second postcard is a highly collectible type (at least for those who collect them).  It is a Large Letter linen card published by Curt Teich.  In this case I know the exact year the card was created, because I've somehow managed in my postcard travels to decipher the little serial numbers on Curt Teich cards.  In the lower right corner of this card, there is a two character alpha-numeric followed by a dash & a 4 character alpha-numeric.  The two character group tells you the year the card was published.  The second character of that group is a letter, and it represents the decade.  A = 1930s, B=1940s, C=1950s and so on.  The first character is a number, and it represents the year in the decade.  So on this card "3B" = 1943.  Its a 66 year old WWII era large letter card advertising Camp Beal, California.  There are tons of these Curt Teich large letters, but there are a finite number of subjects.  Checklists exist, and if someone wanted to they could certainly attempt to collect them all.  That would be interesting.

Like the comic before it, this too presents a classification problem.  My first inclination was to put it in the "US States, Cities & Towns>California" category, but I decided instead to put it in the "Military" category, since it obviously has a military theme about it.  You could make a case either way.

Both these cards are typical linens, because there are hundreds of linens similar to them.  But they are also atypical, because they are not the most common types.  The most common are city street scenes, buildings, lakes, roads and other landscape type scenes.

I got a chuckle out of the first one.
How cool that you were able to figure out the publish date codes :o)

Ivanhoe: Yep, I like the first one too. Maybe someday I'll figure out everybody else's code too. I'm not sure why they just didn't write the date on the thing - but that would be too easy.