Stuff around my house # 2 - on a bookshelf 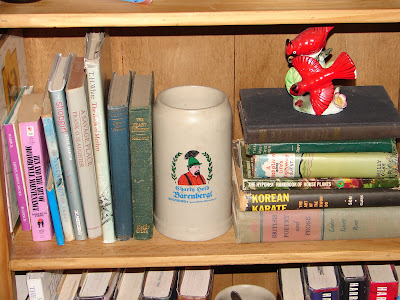 Here are some items on part of one shelf in a book case. There is no rhyme or reason why these particular things are there, except that's where they got put - most likely when we unpacked after moving from Hickory.
-
I've actually read some of these books. I read "Zen and the Art of Motorcycle Maintenance" many years ago. I picked it up and read the first few pages and decided I didnt want to read it again. T.H. White's "Book of Merlin" apparently goes along with "The Once and Future King". I've read both, and liked them. Steve Martin wrote "Shopgirl". What I remember about that is first, Steve Martin wrote it. And 2nd, she took lexapro and created artwork on 3 X 5 cards with crayons, I think. Oh, and she sold gloves in a fancy department store, located in Southern California, where no one needs gloves very much. I've not read "Korean Karate" and have no idea why it is where it is.
-
The mug, or stein, is something I bought when I was in the Army in Augsburg Germany. Charlie Held ran a couple of Bierfests - nice carnival atmosphere & large beer tents. He ran the first and last of the Bierfest season, which ran in Bavaria from after Lent until sometime the following Lent. Anyway, that's him on the stein, he walked around looking just like that. The Barenbergl Bierfest, I have fond memories. A word of warning - the dark beer is very smooth and very strong.
Posted by A Valdese Blogger at 7:54 PM

Korean Karate was written by my Karate teacher. The school was in the NYU Building just south of Washington Square Park in lower Manhattan. Master Kim taught cadets at the "West Point" equivalent in Seoul. A very good book. BTW, some pictures of me in class are stuck inside the book. Back to 1973!

Yikes! I forgot. Uh..will you be posting the pictures?

Valdese! I want to see the whole bookshelf! :)

Ahhh... Bierfests are fun. My favorite used to be mixing dark beer and lager half and half. Yup, those were the days :o)

Ivanhoe: Black and Tans. German Beer is excellent, but from my point of view the best & worst beer I ever had came from the old Czechoslovakia. Budvar Budweis is the best beer in the world bar none. Pilsner Urquell, I could not stand. Just a matter of taste.

was more curious about the books on the shelf below :)