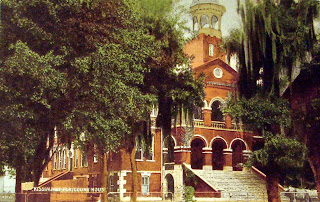 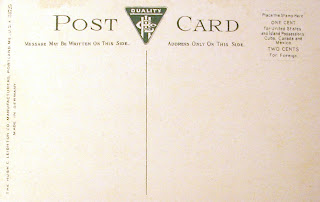 If you want to learn a bit about the way things were, take a look at early 20th century postcards. They cover a lot of subjects, can be very artistic, and are disarmingly complex.   I don't think  postcards have been as popular at any time as they were before WWI.  At the time they were beautiful slices of a different land or culture, now they document things which very likely no longer exist.

Frequently these postcards were printed in Germany (this example was), and I don't know what process they used, but an early 20th century card in excellent condition would surpass a much more recent standard/chrome in pure technical quality.   They seem more alive.

Many of these cards are used, sometimes postmarked by both the sending and receiving post office, and many times these post offices no longer exist.  And these cards spanned a major change in postal history.  Before March 1, 1907 (I believe),  messages had to be written on the front of the card - sometimes there was space for one, sometimes not.  Only the address could be written on back.   So if you have an early 20th century card with a divided back (such as above), it was created after March 1907.  If it has an undivided back, it was created before 1907.

I can estimate that this card of the Court House in  Kissimmee, Florida was created between 1907 & 1918.  Most likely before 1914, because of disruptions caused by WWI.

The stamp box is interesting, and is also typical of the era.

I like these cards, but this is all I can think to write  about them.

My next post will be about RPPCs, and then maybe I'll write something about why I think people buy or collect postcards.  Then, I'll perhaps I'll get into other aspects of the business.