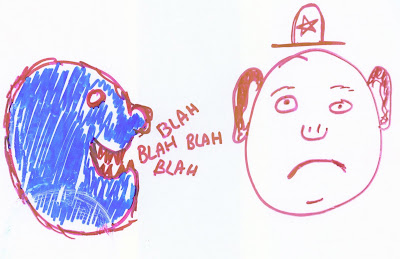 Ratz!  I guess I have one more eBay post in me, I was hoping I was done with it for awhile.

eBay's feedback system is sort of like the community monitoring itself.   When ever someone buys or sells an item, they have an opportunity to rate the seller or buyer thru feedback.   The feedback percentage (100% is perfect) gives an idea of the person's online reputation.

Last year eBay made some sweeping changes in the way feedback is handled.  One of the changes is they allowed feedback from repeat customers to count toward the total, as long as it was left at least a week apart.  Before that change your feedback for a user-id was only counted once, no matter how many times you bought from a seller, or a buyer bought from you.

Another of the changes was that sellers could only leave positive feedback for buyers.   Apparently this was so buyers would have a "more positive experience", and would feel freer to give sellers poorer ratings without fear of retaliatory feedback.   Apparently the folks at eBay never heard of the concept of an "insane buyer".    Most buyers are rational beings, but I've ran into 3 or 4 that I can think of over the ages, who were a little less than rational - it happens.

I've had some harsh criticism hurled at me, pretty much out of the blue, by people who don't know a thing about me.   I have a feeling these people struggle with life in general, and I never respond to it.   They end up getting themselves blocked, and that's that.

eBay provides no way to filter feedback - so if someone has some negatives, it's very hard to find out exactly what it was about.  You have to page thru and manually search it out, and usually it just isnt worth the effort.   Sometimes though, you'll find that the buyer who left the feedback really had no basis.  Other times you find out much more about the seller than the seller ever intended.  People are allowed to respond to their feedback, and the response a seller leaves to a negative speaks volumes about the seller.

We have yet to receive a negative feedback.  Eventually it will happen, and I'm not too worried about it.  We do the best we can.

We have received 1 neutral feedback.  This involved sales tax, believe it or not.  We operate as a business, with a license and everything (just like grown-ups), and we are required to collect sales tax from anyone with a  North Carolina address who buys anything from us.  Every quarter we dutifully send it along to the state.   A buyer took some issue with this or thought we weren't doing it correctly.  He left us neutral feedback, saying he'd sent several emails and we never responded.  I checked our email inbox (and junk box, just in case), and there were no emails from him.  So I responded that we had never been contacted about this, blocked him, and went on with life.

eBay also provides a means for 'detailed feedback', where a buyer can rate a seller's description, communication, shipping time, and shipping & handling charge.  As a buyer, I like it, as a seller, I'm ambivalent.  The biggest issue is that it is all subjective.  Different people have different standards, so two buyers will very possibly rate the same results differently.  However, all in all, it is probably a good thing.  If the descriptions are accurate, and you ship the item quickly, you should have no problem in the long run with the detailed feedback.

Some people dislike the current feedback system very much.  I'm somewhere in the middle.

Ebay feedback is wacky. I received a neutral because I sold a bracelet that was listed at 7" and it was. But the person's wrist was bigger than 7" so it din't fit.

Apparently, that was somehow my fault.

Wow - Da Old Man should have sent a wrist shrinker along with the bracelet!

Yep, feedback is a joke and not being able to give it back to a buyer is an even bigger joke. Hundreds, maybe thousands of eBayers left because of this.

Da Old Man: I don't really like the feedback system, but I don't dwell on it too much either. Your example is EXACTLY the type of stuff that can happen, and because eBay doesn't provide a filter, no one can look to see WHY you got a neutral. They just know you have one for some reason. At least for a year.

Patti Anne: Be honest now, how do you really feel?