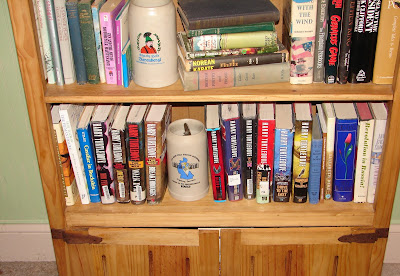 Danke Schon! Thank you for sharing! I'm so glad you did, the series by Harry Turtledove sound very interesting!

Anon: yes it is a long post. You may notice I was forced to use many words more than once.

Wow. Those bookshelves are ... strangely empty. And only stacked one deep!

Pardon me while I stare in fascination at that ... and dream of the day when my own shelves will be that sparse.

Susan: Ah - you should see the floor & nightstand upstairs - tons o' books & magazines. If I keep taking pictures of stuff around the house, I'll get there eventually.