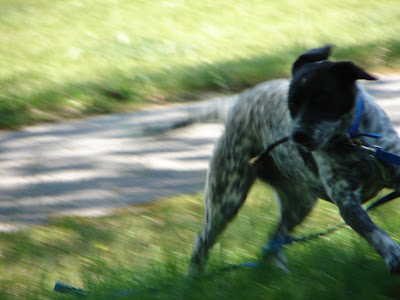 It's September now, so we've had the dog for just over 5 months, and shes' about a year old now. Time for an update.

The picture is Pickles at one of her favorite past times, running with a stick.

As just a reminder, we got Pickles unexepectedly back in early April. She was stuffed in a cage (literally, she could not move) at the Jamestown Flea Market. The guy just wanted to give her away, and the rest is history. She is a part blue tick, and supposedly part Lab. I can see the Blue Tick in her, just from her appearance, not so sure about the Lab. Maybe in her ears.

At the time she had never been inside a house, and had never worn a collar, had probably never been in a vehicle except when she was squashed in that cage. I don't know if she had been physically abused or not, I bet she was ignored. I'm also fairly certain she missed some socialization along the way, with other dogs and other people.

So after 5 months, the pros and cons of Pickles.

Pro:
The games are:
Cons:
She's a work in progress.
Posted by A Valdese Blogger at 1:48 PM

Pickles reminds me a great deal of my dog, or my former dog (since soon to be ex still has him :( ) Rune. Rune would jump on people, NOTHING we did stopped that. Not even those jumping harness leash things. HE led me on walks, he didn't bark unless people were walking by and ignoring him. He was a total people person. He thought me was people, he was my baby. I spoiled him rotten... yes I had a 90lb lap dog. He is a white American shepherd. I love my dog, I miss my baby terribly. Pickles is absolutely adoreable :)

Howdy, thanks for the comment. Ol' Pickles is a handful right now.