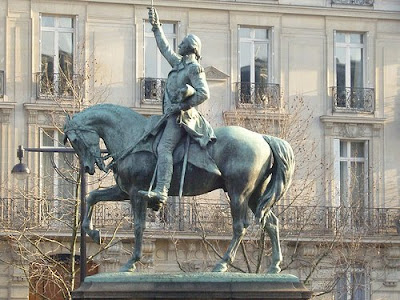 A long time ago I was in the US Army, stationed at Augsburg, Germany.   One long break (we worked 6 days on, 2 days off, rotating shift - so one of the breaks was longer than the other two), a group of us went to Paris.  We were just walking along from one place to another when we were shocked to run into a statue of George Washington.  None of us had any idea that such a thing existed in Paris.  We were really quite young.  I was just thinking about that.
I stole this picture off the web somewhere.  I know I took my own pictures of it, but this was long before digital cameras and I have no idea where they might be.   Anway.  George Washington in Paris.
Posted by A Valdese Blogger at 8:51 PM

What the heck was GW doing in Paris?

The same thing Lafayette was doing in America. But only in spirit.