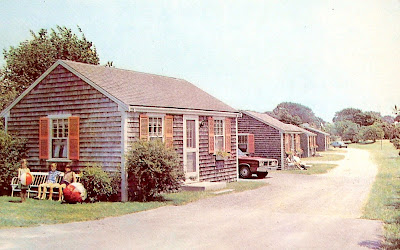 Almost all the cards we sell through our eBay business are standard sized cards (about 3 1/2 X 5 1/2 inches).

The major sub-groups of these cards are standard/chromes, linens, white border, and early 2oth century.  I also treat real picture postcards (RPPC) as their own group.

Standard/Chromes are postcards reproduced from a photograph, usually made using kodachrome or ektachrome 35mm film.  (I reckon).  They are glossy, and usually full color, with the color more or less reproduced faithfully.   The earliest standard/chrome I've seen dates from 1939 or so, and I believe it was a "Union Oil" card, the type sold at gas stations to try to get people to see  the USA with Philips 76 gasoline.   I've also seen them created in the 1980's and 90's, but the vast majority in the U.S.  are from the 1950s thru the end of the 1970s.

The picture above is a typical example of a standard/chrome postcard - it is Peterson's Cottages in Falmouth, Massachusetts.

Most of the time postcards have no decipherable information that tells you the exact date they were created.  So I look for clues in the pictures to give me a rough idea - it's one of the fun things I like to do.  (yep, it's an exciting life).   The biggest clue in this picture is the car - you can see the front end.  I'm not sure what kind it is, but it looks powerful.  It looks very V8, with head room and leg room.  That dates it to late 60's to very early 70's to me, so I can guess the card dates from no earlier than the early 1970s or so.  If I was to just call this is a 40 year old card, I would not be far off, one way or another.   That means the children with the beach balls are middle aged now.

Another simple way to semi-date a card is by any postmark it may have.  You know it was created before the date, but I've seen cards mailed 20-30 years after they were created, so you need to take other things into consideration.

You could google Peterson's Cottages in Falmouth to try to get some history on it, if you wanted. I did, just for fun, and found that these cottages were bought & operated by a Raymond Peterson, who also ran a painting business - sometime after WWII.   He sold them in 1968, no word on if the name changed or not.  He died last year.     I did not find anything online about the cottages in particular, but I also didn't look very hard.

If cottages no longer exist, or were renamed, or changed in some way, that might give you another clue to the age of the card.

Mostly I do not go to extraordinary lengths to get an exact date on a card.   But I look at every single card closely, looking for card type, clothing styles, types of cars, even the way the caption is written on back - writers from 50-60 years ago or more tended to write in a passive voice much more than today's writers.  The language seems more stilted than what we're used to.

Standard/Chrome cards are very common - but the are also among the best sellers.   And like this one of Peterson's Cottages, I frequently spend a lot of time staring at them, and wondering.

With cards, do you (and buyers) prefer ones written on, or mint unused?

Howdy Crochety! Good question, & I'll answer it more fully in a blog post. A lot of people collect cards with postmarks, so these cards have obviously been used. Others want nothing to do with a used card, so the short answer is, it just depends. I buy both types. I'll write about this in an upcoming post - it is now on my list. Thanks for the question!