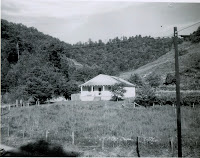 Pictures of my grandparents place - my mother's parents.  My grandpa's name was Noah (pronounced No-ee), my grandma's Lurainne (pronounced Lou-rainy).  Her friends called her "Rainy" sometimes.
-
The b&w & color photo of the house were taken from slightly different positions, and perhaps 20 years apart.  I took the color pictures as a teenager, I don't know who took the b&w one.  The scene is very similar.  In the color pictures, the corn, the corn my grandparents grew, (among a thousand other things) is much higher.   I learned early that it didn't pay to run through a corn field on a hot day.  The stalks are sharp.  They cut.  The sweat stings.  It hurts.  Don't do it.
-
In the third picture there is a road, a creek, and a bridge.   The road came down the hill from the main road, which was something less than a two lane county road which can seem pretty precarious at times, especially when you're used to modern roads.  This main road is located behind the 'photographer' (me).  The dirt road that went past my grandparents just went up into the hollow, back into the hills, to other houses.    The creek is the famous Montgomery Creek. The bridge was built by my grandfather.  During the spring rains, it floods, and I have seen water rushing down the creek lapping at the bottom of that bridge.  It's unbelievable.   The people on the bridges are part of my family.
-
The last picture is the road heading by my grandparents place, going back into the hills.  There is also a footpath next to it - not everybody had a car.  I don't think my grandparents ever owned an automobile.  To the right is the house, then a little behind that is the coal house, and the smoke house.  When I was young, the house was heated with coal fire places - I still have a fondness for that smell.   And I was always amazed at how you could be very warm on the side facing the fire, and cold as ice on the side away from the fire.   Anyway, they literally kept tons of coal, very abundant back there in Eastern Kentucky.
-
There was no indoor plumbing either, and I thought nothing of it.  I've been in my share of outhouses.  On hot summer days, I'd check the area to make sure there were no snakes curled up in a corner somewhere.  I just did my best to ignore the flying stinging insects, hoping what the older people said was true, if you don't bother them they won't bother you.  I had my doubts. In the winter I didnt worry so much, cause the snakes went away.
-
The place was located in what was known as "bottom land" - land that was more or less level, near the creek.  It was the best type of land to have.   I spent a fair amount of time there as a child.
Posted by A Valdese Blogger at 9:19 PM

Hi there:
Just stopping by to wish you Happy Easter and let you know that I moved. My new blog is at http://ohiowithlove.blogspot.com/
Stop by for a visit some time :o)

Hello..a friend sent me this link
and I was thrilled to see your pictures of your grandparents house
on Montgomery Creek,Knott Co.Ky.
I was interested in your grandparents,Noah and Lurainne,
what was their last name?

My greatgrandparents,Elhannon and Katie Vanderpool Gayheart
owned a farm
on Montgomery Creek,Knott Co.Ky
until 1919 and then sold it to
William Cox.
This property was up on the hill
and the family cemetery is still
there, it was exempt from the
new owner.
My grandfather and his brother are buried there.
I have a webpage for the ole farm
and cemetery.
I have linked the page here.
http://nancygayheart.com/elhannonandkatiegayhartfamilycemetery.htm
I would love to hear from you and
thank you for posting these pictures.

Nancy: William Cox was my great-grandfather, I'm sure. I remember Mom talking about "Grandpa Bill Cox", and I've seen pictures. He died before I was born. Grandpa Noah's last name was Cox, and Grandma's maiden name was Bishop - her mother was a "Carter" and died shortly after grandma was born. She was raised by a family in Hindman, Ky I believe. Her father moved back to his home, Big Stone Gap, Va. There is a cemetery on the hill behind the house - it was pretty high up and over-run the last time I saw it, which is a long time ago now.

I noticed your comment that there
was a grown up over run cemetery
on the hill above your grandparents
house, for many many years, my Gayheart family cemetery was unattended and was grown up real bad.
When I first visited in 1998, when the present owners saw that there were visitors at the cemetery, they had
the cemetery cleared from weeds and brush,my greatgrandfather's military stone was
also mounted securely.

My greatuncle's granddaughter
and her family visit the cemetery
every year.
I live in Colorado, I haven't been there since 2004.
I cleaned my grandfather and my great uncle's stones at that time.

I wonder if this is the same cemetery,you describe?
There are other houses down below on Montgomery Creek.