A Postcard From Vietnam 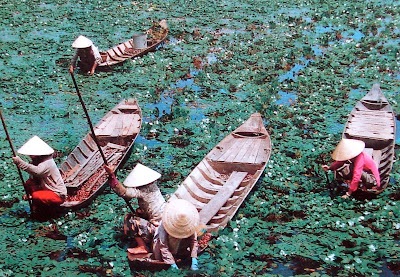 I am a member of Postcrossing, and I received my very first postcard from Vietnam.   The caption on back is in several languages.  The English is: "Reaping of water caltrops".

I did not know what a water caltrop was, so I had to look it up.   It's obviously a water plant, with a stem that can be 12-15 feet long with roots anchored in the mud, and produces a fruit shaped roughly like a head of a bull.  Inside this fruit is a large seed which can be roasted & eaten.  It's cultivated in parts of Asia and Africa.   However, in places like the Eastern US and Australia, it's apparently considered a weed - and a nasty one at that.

It's an interesting card, my first from Vietnam.

It came into my mind to ask some interview-style questions of a few fellow postcard collectors and wondered if you would be prepared to join in? If you are interested, my email address is daily {dot} postcard {at} gmail {dot} com.

I'm learning new stuff about Vietnam with you. How cool! I have to check out that Postcrossing thingy - it sounds like fun :o)