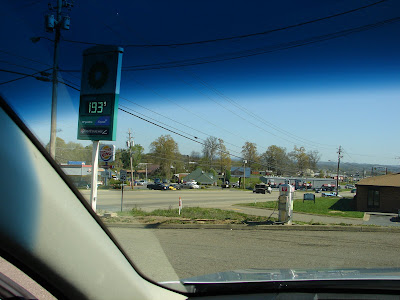 I took a weekend trip back to my tribal home in eastern Kentucky - my father has been ill and I thought I'd run down and pay a visit.  The picture above is somewhere in Tennessee, I believe just before Kingsport.  I had stopped to fill up the car & stretch my legs (mostly to stretch) and figured I needed to take some sort of odd picture to post in this here blog.

In Kentucky, the redbuds are in full bloom.  The dogwoods are just starting, and many of the trees do not yet have leaves.  Springtime there is about 3 weeks to a month behind springtime here in North Carolina.  I find stuff like that interesting.

Here's something else I find interesing - the perceived length of daylight.  Kentucky and North Carolina are in the same time zone.  Kentucky is further west and further north.  Just based on east/west, the sun should set later in Kentucky than in NC, but NC should get more morning sun. However, there is the north/south issue, and at some point there is more sunlight in the nothern lattitudes than in the Southern - both morning and night.  When I was in Germany, I thought some days in the late sring would never end.   Also, in the part of eastern Kentucky I was going to, you have a lot of hills - a road, a creek and steep hills is much of what Knott County is.  That artificially makes the sun appear to set earlier than it otherwise would.

So, how do they know?
Posted by A Valdese Blogger at 9:23 PM