My .02 on Huckleberry Finn 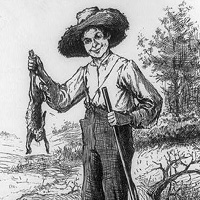 It's been in the news lately that a new edition of Huckleberry Finn is being published, with the "n-word" expunged, replaced with the word "slave".   A lot of people think this is a good thing, that it doesn't change the story and perhaps because of this change a lot more students will be allowed to read it as part of a high school curriculum.   But a lot of other people feel that it is censorship and by removing that word you remove some of the power and meaning the book.

I read Huckleberry Finn the first time when I was 11 years old.  I read it on my own, not part of a school assignment or anything, complete with all 200 + instances of the 'n-word'.   At age 11, I knew well enough that I should not go repeating that word amongst my classmates.  I new it's connotations and history.  Much later I read Huckleberry Finn to my son, the very same book I had read as a child, one chapter at a time when he was quite young - much too young to grasp the finer points.  When I read this to my son, I did exactly what this person who is publishing a revised version is doing - I substituted the word "slave" for the "n-word".  But here is the difference - my son was 5 or 6 years old at the time, an age when kids repeat everything they've heard.  I'm pretty sure he wasn't old enough to understand that he should not go slinging this word around the playground.

By the time people are old enough to read this on their own, they should be able to distinguish between differences in usage and connotations of words in the mid-19th century and the early 21st century.  They should have a grasp of context.

The book was published in 1884, and is set some 30-35 years earlier, in the 1850s.  It starts in Missouri, a state where slavery was legal at the time, and ends in the deep south, mainly because Huck and Jim fell asleep and missed their intended destination of Cairo, Illinois. (In reality, Jim probably would not have found much sympathy in Cairo, Illinois, but that's reality, and Huckleberry Finn was fiction). But anyway, along the way there are all kinds of people, descriptions of Mississippi River life, humor, and some astute social commentary.

Huckleberry Finn may have been the first major novel to make use of dialect, or at least the first American one.  I think I read somewhere that Mark Twain used 7 dialects for his characters, but I'm not sure.  When I read it at age 11, I had no trouble understanding most the language used.  Much of it was very similar to the way my grandparents spoke, and even though I didn't use most of the words or phrases in my everyday speech, they were very familiar to me.   I didn't realize it at the time, but this gave me a bit of an advantage in understanding this book.  Anyway,  Jim, the uneducated slave, spoke differently than Huckleberry who had a little bit of education forced upon him.  Huck spoke slightly differently than Tom Sawyer, who attended school more regularly.  Huck's father was as uneducated as Jim, but spoke differently than either Huck or Jim, because he had a different background.  They all spoke differently than the Widow Douglas, who tortured poor ol' Huck with manners and religion.  And none of them spoke as articulately as Judge Thatcher, who was quite well educated. (An aside:  I always thought Judge Thatcher may have been a bit of a crook.  Can't prove it, but in the "Adventures of Tom Sawyer",  Huck had come into a bunch of money as a result of an encounter with Indian Joe, and in "The Adventures of Huckleberry Finn", Judge Thatcher seemed a little too agreeable to manage Huck's 'fortune').

What I'm getting at is that Mark Twain wrote the book with the characters speaking American English as it was spoken in by various strata of society in Missouri in the 1850s.   I am sure the "n-word" was used at that time by people of all races without a second thought.  I don't know that it had the same connotations or meanings then that it has now.   I do know that the connotations and meaning it has now are not good.
Writing dialect, getting it right and being consistent is difficult.  If you remove this word from the book you weaken part of the author's attempt at authenticity and reality.  It skews the portrait of life in the 1850s.

Does it matter?  Maybe not.  It won't change people's lives one way or another.  Neither will painting a Hitler mustache on the Mona Lisa, but I hope no one does it.  However, I think if you can't handle reality in literature you should stick to sit-coms on TV, where (sarcasm alert) they'd never ever dream of using stereotypes or offensive language.
Posted by A Valdese Blogger at 2:33 PM

Yours is the first blog post I have seen about this subject! I thought there would be more discussion everywhere. I think they should leave it alone and teach that we don't use the "n" word. There is a reason we shouldn't change history, "lest we repeat it".

Karen: I'm inclined to agree. It's a realistic portrait of people and attitudes well over a century ago. It may not be pretty or nice, but I'm pretty sure it's the way it was.

I like your .02 on the subject and agree that it should be left alone, not everything needs to be sanitized for our protection.