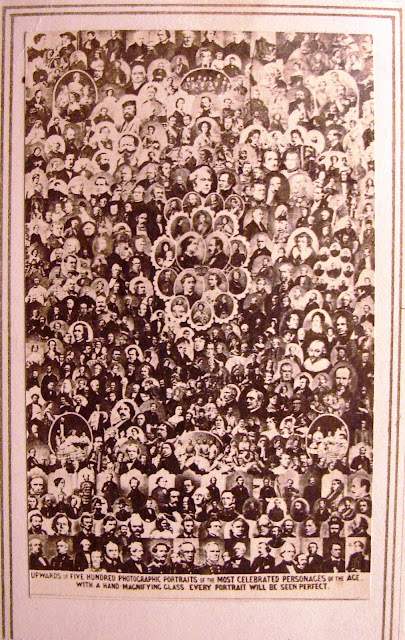 This is a CDV I bought recently, the only single CDV I've ever purchased.  I usually buy them in groups of 5 to 50, but this one interested me.   It is a picture of about 500 people, and according to a caption written a the bottom, each one is easily identifiable with a hand held magnifying glass.

Anyone who knows anything about 19th century advertising knows that being truthful about the product being advertised was not anywhere near a requirement.  So I have my doubts about how easy it is to identify anyone.  I can identify three, one who I'm pretty sure is William Shakespeare, and of course George Washington & Abraham Lincoln.  I didn't need a magnifying glass for any of them, but my glasses sure helped.

I'm pretty sure that this was made in the USA, even with the absence of photographer information.  In addition to Washington & Lincoln, there are several people in the bottom row who look to be wearing US Army dress uniforms of the 19th century.  Also, I'm pretty sure Washington & Lincoln would not be considered among the "most celebrated personages of the age" in Europe or Canada.  In the USA, different story, so this was almost certainly made in the USA.

I'm certain about the age of this photo too.  It's thin, has square corners, a couple of border lines, and in this case no photographer information.  It looks like the bottom may have been trimmed. It all points to vintage 1860s-1870s era.

If Abraham Lincoln is in the picture, that probably dates it to some point after his assassination in 1865.  I'm sure this is full of government, military and literary types.  I'm looking for the Bronte sisters, Lafayette, Edgar Allen Poe, U.S. Grant, George Custer, George McClellan and various others.  I don't expect to find any leaders of the confederacy represented (if Abe Lincoln is on it during this time frame especially, this was made up north somewhere) but you never know.  It would be interesting to see how this list was shaped by the political leanings of  whoever made it.  For example, McClellan & Lincoln didn't exactly get along with each other, so if Lincoln is on here McClellan might not be.

Thing is, most "celebrated personages" of this period are probably pretty obscure now.  I think I'll be looking at this for a long time.  If any of you all recognize anybody, leave a comment, I'd appreciate it.
Posted by A Valdese Blogger at 4:35 PM

Sorry about the delete I mis-read something you wrote. I believe I spied Custer...

Grance: I was looking for Custer! I would have expected him to be there - he was quite well known, even before Little Big Horn.