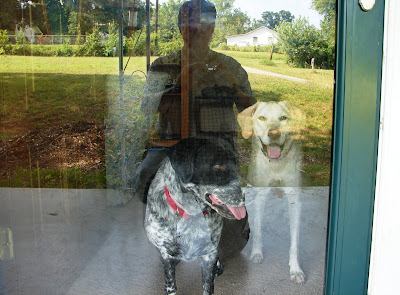 This is a disorienting picture of two dogs who would probably get married, if dogs could get married and if North Carolina allowed same sex marriages.   I took the picture through the glass of the front door, so you can not only see inside a bit if you look hard enough, but you can see outside as well, a mirror image of the view in the very front of our house.  And, in what is closest I've ever come to displaying myself in this blog, you can see me taking the picture.

Pickles is the black and white "ticked up" dog in front, & Marley is the white dog in back.  Pickles will be 3 years old later this year while Marley is just barely out of puppy hood.   They ran around our field (the very one I have to mow, because it rains, and on this planet when it rains grass & stuff grows) on several different occasions, then spent a lot of time trying to steal rawhide bones from each other.  There's plenty for both, but apparently that's not the issue.  They tend to exhaust each other, much more than I could ever tire Pickles out on one of our walks.

I took this picture just after I took the picture of the hummingbird feeder in the last post.  Apparently I was a topic of girl dog interest at the time.
Posted by A Valdese Blogger at 3:49 PM

It is grand when dogs can have fun together, instead of fighting for position in the hierarchy.