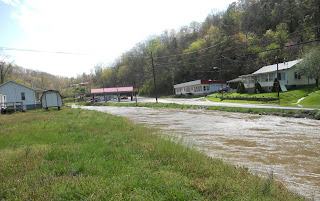 Just got back from a quick trip to Kentucky, where heavy rains swelled the usually miled mannered creeks in Knott County.  This picture was taken in the outer reaches of Hindman, the county seat.  Troublesome Creek barely crept over its banks in a couple of places, so there was no flooding in town.  But it was up pretty good and moving fast, and continued to rise long after the rain stopped.  You wouldn't want to fall in.

The heavy rains in Kentucky were nothing compared to the winds & tornadoes in North Carolina, but by the time I got back all that was over with.  We live in the western part of the state, and while I understand it was very stormy here, the severe damage happened much further east.  We've had a series of quite violent storms this month, so far Valdese has been lucky.

My father, brother & I (in Kentucky) were sitting around talking about an elderly and "eccentric" neighbor, when my brother said "That old woman would irritate a rock".

Friday night we were entertained by a vacuum cleaner salesmen I inadvertently let into my father's house.  It would require more explanation than anybody would care to read, but for some reason I thought they knew each other.   From him I picked up a little tidbit that the vacuum cleaner has "no cost, but there is a price".   I decided I'd remember that.
Posted by A Valdese Blogger at 8:21 PM

That's brilliant - the "irritate a rock" comment. Love it.

One of my favorite Southern folkisms is "Thief? He could steal the inside of a biscuit without breaking the crust" and of course the classic "If I'm lying, I'm flying and my Mama weren't no blackbird".

Yep, there's a million of 'em.

I'll knock you into next Tuesday & you'll miss your weekend.

Dumb as a rock and twice as ugly.

If a toad had wings its tail wouldnt bump the ground.

More frightened than a dog in a room full of rockin' chairs.

He has more money than Carter has liver pills.

That dog couldn't track down supper.