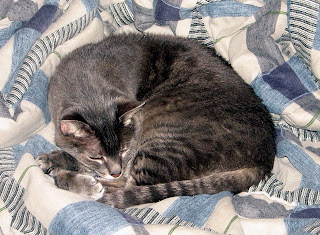 I was just thinking about Snowchief the cat.  This is a picture of him in better times, 2 or 3 years ago.  He died last year, I think he was 18 years old.

This was a typical scene, especially in his later years.  He made an art form out of being comfortable, of finding he warmest spot in the house, especially on cold days.

I miss having a cat or two about the place.  It's almost like having a wild animal in the house, and they keep mice and bugs honest.

Now we have Pickles, a very "interesting" dog, but we're hesitant to bring in another cat (or two) into the house.  Pickles is a tracker of small animals.  She is a real threat to the day-dreaming squirrel, the rabbit who decides to take five and kick back with one of Fidel's finest, the half feral cat so intent on stalking its prey it doesn't realize a goofy ticked-up mutt is literally sneaking up on it.  The only thing Pickles has ever actually caught was a dead rat, which she happily brought and laid at our doorstep.  Very cat-like.  I suppose she was saying thanks for the room and board.

Snowchief would have never given up the rat, seeing no need to thank us for the room and board.

I've never seen a rat or a mouse around the house, so who knows, maybe Pickles is better at this than we realize.

Snowchief the Cat could handle Pickles the Dog.  Pickles was not Snowchief's first experience with dogs - he lived a solid 10 years with a Black Lab, who he got along very well with.   Pickles was a puppy, and was very much an aggravation to the cat, but Snowchief almost always held his ground.   I'm pretty sure Pickles just wanted to play, but had no clue she couldn't play with a cat the same way she played with other dogs.  Maybe.  I really don't know what Pickles thinks.

Anyway, Snowchief was around for a lot of years.  He was a good cat, and I was just thinking about him.
Posted by A Valdese Blogger at 8:46 PM