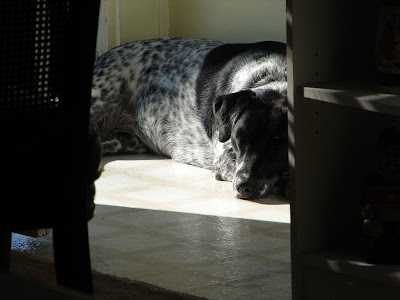 Ever since I looked online a couple of years ago, I've been telling anybody who asked, that my dog Pickles was a Bluetick/Lab mix.

I ran into a person who agreed with the Lab part, but not the Bluetick - he insisted that Pickle's is a Blue Heeler.  He said he had raised & trained Blue Heelers, and she had the markings.

A Bluetick Coon Hound & a Blue Heeler are two different animals.   But surprisingly, when they are mixed with other breeds, things can get confusing.

Pickles is smaller than either a Lab or a Bluetick.  She is a moderate to high energy dog (despite her appearance in the picture), extremely alert.  She has a very good and resounding bark - not quite the quality of a Basset Hound maybe,  but you won't ignore it.  She is basically friendly, though that is not always apparent to strangers.

In the words of a little girl in the Food Lion parking lot, she's "all ticked up".   Her ears are Lab-like, but her body markings arent.  She has the one large black spot you can see in the picture, and a smaller one near her tail that you can't see.  She get's a lot of looks, because she looks like a dog that might be good at something.

Personality wise, she's always on the alert.  Constantly looking out windows, going from one to another, and barking at anything that comes close to our property, especially people and other dogs.   She seems to track things, if she catches a sent she wants to follow it, and she follows it on the ground.   I've not seen any herding characteristics, but I wouldn't know them if they kicked me in the nose.  She has a LOT of energy - the walks I take her on, no matter how far, are mere child's play for her.   I was used to being able to outlast dogs on long walks, but I cannot outlast Pickles.

So now I looked online again, and I've seen Blue Heelers with body markings similar to Pickles.  The head is much different, but some of the body's look very close.  I'm starting to join the Blue Heeler camp.

It doesn't matter.  Pickles is our dog, she's part of the family, and she's a mutt.  But it gives me something to talk about.
Posted by A Valdese Blogger at 9:51 PM

A mutt is a dog of many mixed breeds; Pickles is just two that we know of. I think she's just a good ole all-American doggie!

And some day you must tell us the story of how Pickles got her name..