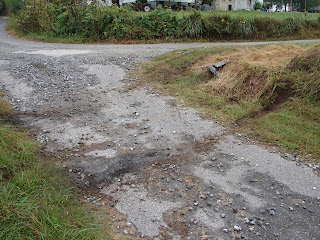 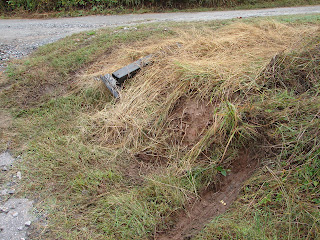 Ok, I'm a few days late on this one. Doesn't matter. Quite early last Saturday morning my wife & I awoke to an odd sound, and the dog barking. I remember thinking, half asleep, that it sounded like a car was stuck somewhere. Tires spinning and stuff.

I got up, walked into the bathroom, peered thru the blinds, and yep, there was a car stuck somewhere, alright. Right across our driveway wedged between two banks. Hmmm, I said to myself. Not my problem. And I went back to bed.

Now, to some people, especially those of you who live in the civilized European countries, that may seem a bit callous. But, this is not the first time this has happened. It is an on-going problem that has resulted in a bit of property damage to us.

We are the first of three houses on a one lane gravel road, that dead ends at the 3rd house. It was a selling point for us when bought the place - its a place where only local traffic will go. None of those odd tourists in their garish outfits going to see the sights of Valdese straying down our way, nosir.

When we moved here in 2007, the house next door was empty. Now its rented, and they have a lot of visitors, every day, many of whom stay only a few minutes, then leave. (Hmmm, ya reckon?) Its one of these houses built a long time ago, and you literally step out of the place and are in the road. Honestly, it cant be built more than 2 feet from the road, and there is very little parking. So, what many of their visitors do, is try to back out.

This is where it gets interesting. A lot of them try to back into our drive way, and pull straight out from there. But that is not an easy thing to do. The road curves in front of our drive way, it's very narrow, and anywhere there is not a road, there are ditches or banks. Our driveway is not made from backing into from that direction, but they give it their best shot anyway.

The dark colored mini-van that tried it early on the morning of Oct 18th, didn't even come close. It went straight over the bank, and found itself wedged between two small hills on either side of our driveway. I imagine the driver looking very carefully over his/her left shoulder, and being very surprised to find him/herself impaled on a small hill and a clump of metal and plastic, then straddling our driveway with no place to go. I can also imagine what was said at that very moment, unless he/she is a saint.
The piece of metal laying flat on the ground is what remains of our mail box.

Our mail box did not die as a result of this incident. We gave up on using our mail box months ago - about the 4th or 5th time it was run over by people trying to back out, it became fairly useless. We have a box in the post office in town that we used for our business, so just started having all our personal mail delivered there too. I leave it out there as a monument to bad drivers, a statement about people who don't care about other people's property, a silent warning to anyone who pays attention, and as a vigil to honor slain mail boxes everywhere. I suspect there are a lot of local automobiles with dents and scrapes and possibly some lurking unknown damage caused by my mailbox, so it got its licks in, passive though they may be. It makes for good yard art, too.

After awhile they managed to get out - still not sure how, and really don't care. They left me two good tire tracks in my grass up there, which of course is just that much less grass I'll have to mow. Eventually it'll fill in with weeds and I won't know the difference.
Posted by A Valdese Blogger at 8:56 PM

And there is still a big, tangled up piece of fencing with little yellow bits of plastic attached that I put up to try to warn people not to back up. They backed up over it!

We have one of those homes with "frequent visitors" across the street, as well. I only wish they'd get stuck somewhere.

Your mailbox is standing tribute to my mailbox which has met its demise multiple times. Your idea of having your mail delivered to a post office box is a good one.
I'm sorry there are so many people who are just so careless with other's property.