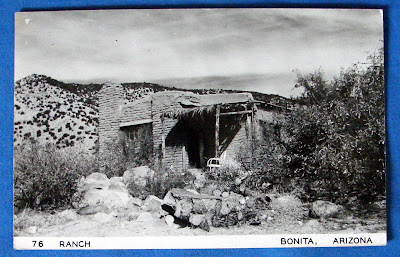 It's been awhile since I posted a picture, so I thought I'd post this one.  This is an RPPC of a house somewhere in the vicinity of Bonita, Arizona.  The stamp box dates it to the 1930-1950 time frame. Rather rustic, to say the least, and looks like a perfect habitat for rattle snakes.  I listed it on our eBay site today.

I decided to look up Bonita, Arizona, on Google Earth.   It pointed me to a place where two roads meet in the desert.   I scrolled around and did find a building of some sort, but there does not appear to be much in Bonita, except desert.

Not to be deterred, I turned to Google and found this little blurb:  "Bonita was the town that catered to the soldiers and ranch hands in the area as well as Fort Grant. Its post office was established in 1884 and lasted until 1955".   Of course this was describing a ghost town.   I also found that, no surprise here, Bonita (the ghost town)  has warm winters and hot summers. Which to my way of thinking means rattle snakes year round.  And bugs that never die.  As long as you know that going in, it seems ok.

I don't think Bonita exists as a town.   That's too bad, it's a pretty name.  And perhaps I should increase the asking price on that post card.

Bonita means "beautiful" or "pretty" in Spanish, from what I learned, anyway.

I like the little metal chair on the front porch and the sky behind is very clear.

Too bad "Bonita" is gone!

I lived and preached at First Baptist church in Bonita around 1975. Contrary to your take, it was quite alive. Beautiful country, great people. I have tried to locate the church on Google maps, but does not appear to be there anymore.

ferretface: Cool! I saw a lot of things for it when I googled it, but they all led nowhere. I'm glad it's still around.

Folks, Bonita does still exist for some of us. I went, and graduated 8th grade at Bonita school, which I think is still there. I walked up and ate my lunch at the old Bonita store. Peacocks wandered around, feathers everywhere. I lived with my grandfather at Ft Grant where he was a teacher when it was a boys school, and you could see Bonita from there at night across the desert. Beautiful place.