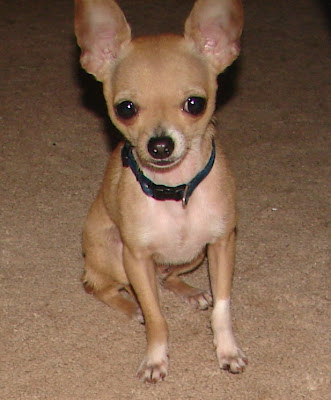 Eugene the dog went back to his previous owners.  Sigh.  That was always part of the deal, if we didnt feel it was working out, we could return him.
Well the pore ol' feller was terrified most of the time he was here.    He was afraid Pickles was going to eat him, I guess, and I can understand.  Eugene weighed 2 1/2 lbs, literally.  Pickles weighs 50-60 lbs,  and when she'd bound in Eugene's direction, it would terrify him.
But Pickles is generally a submissive dog, and little Eugene found that out very quickly.  Eugene managed to create his own defense perimeter, and it was impressive to watch.  He became like teeth with legs, and he backed Pickles off.  I was very impressed, and have a new respect for Chihuahuas.   I didn't realize something that looked so delicate could be so ferocious.
However, Eugene wasn't eating much at all, and scarier, wasn't drinking.   He'd had a very serious episode several months ago, when he became too dehydrated - the little guy almost died. So we were worried.
Eugene would do better in a house without other pets, and probably without small children too. This is a dog who would be happy to sleep in your lap for hours.  In fact that's what he did as I did my eBay stuff in the mornings - he'd lay in my lap and sleep while I worked on the computer, ever now and then waking up and looking around or changing positions.   I liked Eugene a lot.
Maybe we didn't give it enough time, but it didn't seem that things were going to get better.   And the dog seemed to be scared most of the time.
I like the little dog an awful lot, and I feel bad about it, like a failure of sorts.   He may end up staying with his owners, or they may find another home for him, I'm not sure.   He's a good little huge eared dog.
Posted by A Valdese Blogger at 9:21 PM

You'll always be his favorite uncle. That little guy loves you!