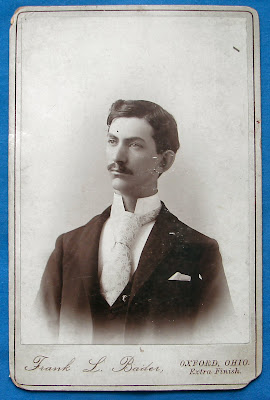 I had never heard of R. Ames Montgomery, and in the annals of famous people, he's probably pretty far down on the list. But here he is, in a late 19th century photograph, made in Oxford, Ohio.

There is some interesting information written on the back, apparently by his own hand. He has written "Compliments of your friend R. Ames Montgomery, Miami University '93, Oxford, Ohio, home town Belle, Ohio." He also wrote Greek letters for Beta Thea Pi or Beta as it apparently is better known, so I assume he was a member of that fraternity.

I found this interesting. I googled his name and found out some more information. He was born in Indiana in 1870. He graduated from Miami University in 1893 - back in 1893 there was no need to distinguish Miami of Ohio from the now much larger & better known Miami in Florida. He also graduated from McCormick Theological Seminary in 1896 - so this was a well educated and presumably religious person. He served as a pastor for awhile, and then became president of Parsons College in Iowa in 1917. In 1922, he took over as president of Centre College in Danville, Ky, and things did not work out well. Apparently Dr. Montgomery was interested in advancing the already high education standards of the college. But it just so happened that in the 1920s, Centre College of Danville, Ky, was a national college football powerhouse. They had defeated Harvard in 1921 - today a good high school team might be able to beat Harvard, but back then that was quite a feat. In 1924, the team was considered one of the 3 best in the nation. Apparently the school's accreditation was being challenged, because more emphasis was being placed on football than education. Dr. Montgomery apparently wanted to shift the emphasis back to eduction, but the alumni and student body disagreed. They circulated a petition asking him to resign, and he did, in 1926.

After that, I don't know what happened to him. I saw a picture of him online in the 1920s - he looked pretty stern. That's how they were back then.

Looking back it's easy to see how Centre College had no chance of maintaining its status as a national football power for any length of time. As the popularity of the sport grew, the larger colleges, with access to tons more money, would dominate. Apparently in the world of the 1920s, that was not obvious.

Anyway, this picture is a small fraction of some one's life. Someone who did pretty well, all in all.
Posted by A Valdese Blogger at 4:06 PM

This post one of the reasons I read your blog, I really enjoy the stories behind your finds.

linlah: Thanks - I like this kind of stuff & it makes it fun. And you never know when you'll come across something like this.

I agree with Linlah. That so interesting! Very sad for him to be asked to resign for something so honest as education over sports.

We still have that problem today, funny how somethings get worse instead of better.