How it came about that we waterproofed our deck today. 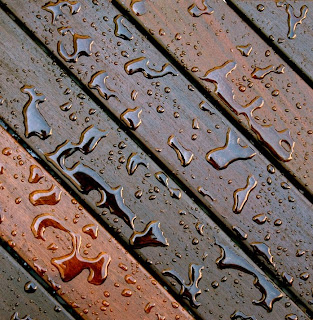 I must come clean.  This is not our deck - it is some random picture of a deck I found on google, and just uploaded it to represent our deck.  And rest assured, oh random owner of said random picture, I did not steal bandwidth.  I downloaded it to my computer, scanning it along the way, then uploaded it here.  Good, now that's settled.

We waterproofed our deck this afternoon.  Hadn't planned to, stuff just started happening and before you know it things were out of control.

The first thing that happened is we went to Lowe's in Morganton to get some deck type sealant.  I must let you in on a secret - I hate going to Lowe's (or Home Depot etc), for pretty much any reason whatsoever.  It is not a place of comfort for me.  Anyway, we bought some the stuff for the deck, a pump sprayer, 'cause we were told it would be a lot quicker & easier to waterproof the deck that way,  some furnace filters, a case of bottled water, a weed whacker (something else I'm not fond of), a flea collar, and some other random stuff.  I do not like Lowe's.

The reason we had to waterproof the deck was because it was recently completely cleaned with a power washer.  This took everything off the wood - including any sealant.  It looked great, very clean,  but its protection from the elements was no more.

Our deck was power washed as part of a bartering arrangement with the person replacing our roof.   The bartering came about because we had an old car which we felt was undependable, we had bought a new vehicle, so we thought we'd try to sell the old one, figuring we might get more for it that way than by trading it in.   So my wife asked our head roofer guy if he knew anyone who would be interested, and the head roofer guy said, "Tell ya what I'll do".  So he did some extra work on the house, work that I would have never done, in return for us signing over the car to him.  A part of that extra work included power washing the deck.

I really like bartering.  I have no idea if we made a good deal or not, and really don't care.  One less car to keep up with, and some good work done for the house.

But anyway, there is a direct link between that barter arrangement, and us heading out to a large, scary and (to me) extremely unappealing home improvement store, buying a bunch of stuff, coming back, me sweeping off all the acorns (pronounced "A-kerns" by me and everybody else in Knott County) that had fallen on our deck, said exertion causing me to be completely covered with sweat, because it is indeed summer time in North Carolina and just being hot is not enough, no sir, it has to be HUMID as well, and then spraying our deck with a chemical that I didn't really like all that much - my eyes are stinging right now, hours later, but did it to keep the wood from rotting,  because it's hot, humid, & wet in North Carolina & stuff rots here.

How was that for a 19th century sentence?

It's all done now.  Next on my agenda, probably tomorrow sometime, is figuring out that stupid weed eater.

P.S.  I read over this post and realized I made it look as if I sealed the deck single handedly.  Not so.  Actually our very own Patti Anne did the vast majority of the spraying, and was the driving force behind this little project today.  I just provided the muscle, so to speak.  I swept off the deck, moved the furniture & plants, struggled to open the cans, figured out the pump on the sprayer, and sprayed parts of the outside railings that were too high for her to reach.  I'm tall, she's not, so I have my uses.
Posted by A Valdese Blogger at 7:50 PM

Now if we'd just get some rain so we know it's working!

Tallness is a useful trait.

For some reason going to Home Depot or Lowes just creates more work than originally intended. And a budget breaker too!

At least all that work is done and you have one less car in the process. Sounds like a deal to me!

Patti Anne: The rain has come.

vange: Sometimes it's good to be tall.

Heather: I'm with you on that one. Some people actually get IDEAS for stuff when they go there.