Anybody up for some written French? 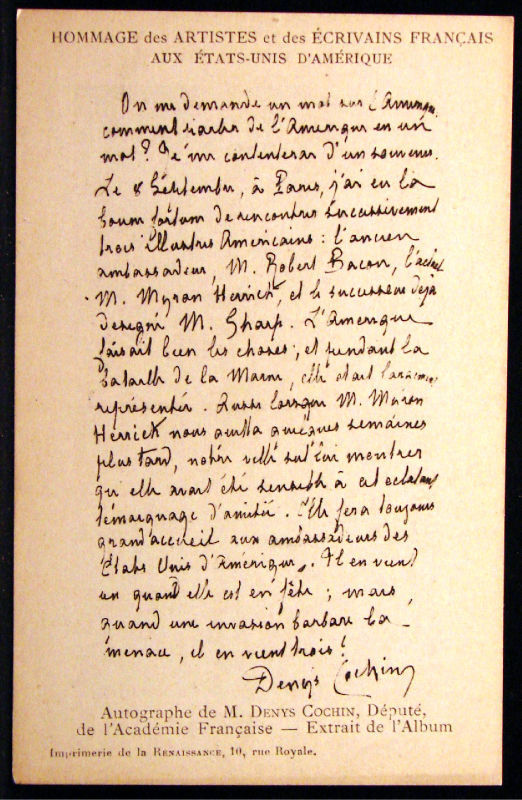 I translate the title as "A Tribute from French Artists and Writers to the United States of America".  I don't speak French though, so I could be wrong.  The whole card is an excerpt of something written by Denys Cochin, who was a deputy of the French Academy (of Sciences, I reckon).

OK - I am NOT equating the Catholic Church with communism or anybody or anything to Josef Stalin.  I'm just wondering what he felt it necessary to defend it from.  Of course, we're talking late 19th & early 20th century here, and there were lots of things going on then in Europe.  I'll put this on my list of things to read up on.

I don't know the exact age of this card, but there's a good chance it is pre-WWI.  And it's for sale.  If you're interested, click on the title.
Posted by A Valdese Blogger at 8:30 PM

hi... here is a rough translation. there were two words i could not make out but think i managed to handle their "gist."

"I’ve been asked to say a word about America. How can you summarize America with just a few words? I am going to settle for sharing a memory [an anecdote]. On September 8, in Paris, I had the good fortune to meet three famous Americans, in succession: former ambassador Robert Bacon, the current ambassador Myron Herrick, and his designated successor Mr. Sharp. America does things right... and during the Battle of the Marne, America was well represented (acquitted herself well) – illegible:illegible - When Mr. Myron Herrick left us a few weeks afterward, Paris showed him her gratitude for his remarkable gestures of friendship. France will always make a praiseworthy welcome to the Ambassadors of the United States of America. When Paris is festive, they send us one ambassador... but when the city is threatened with a barbarian invasion, they send us three!"


apparently, herrick was quite the hero within the ambassadorial community -- he did not leave the city to follow the parisian govt to bordeaux but stayed (the only embassy to do so) and "planted" various americans throughout the city, in museums and other important places, hoping that respect/fear of americans would keep the invaders from looting the french patrimoine...

Bianca: Thank you, this is very interesting. Apparently I was a few years off in estimating the age of the card, but it's still quite old. I'm amazed you could read the writing. Thanks again!