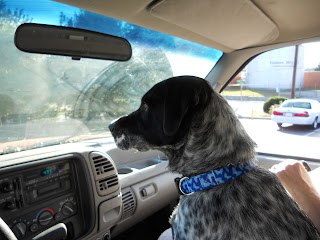 This is Pickles the Dog in the front seat of our old truck, keeping a careful eye on my maneuverings.  I took this picture a few days ago, back when the sun was shining.

I bought this truck in November 1994, so this is its 16 year anniversary.  I'm not sure if it has achieved clunker status yet, but it does have a large dent on side, caused some years back by a disagreement in a parking lot apparently.  I never got it fixed, having moved beyond putting a lot money into this particular mode of conveyance.  It is in semi-retired status, rarely being driven further than Morganton, and most times not even that far.

Pickles usually rides with her head out the window, ears flying back, big smile, happy as can be.  But sometimes she sits like this, just watching were we're going, as if she could give directions or advice.

She's very routine oriented.  We make the trip to the post office everyday, for example, and she'll give me a look if I take a different route back.  Never fails.  She also doesn't like it if I go too fast - apparently it makes her sneeze.  All in all, she seems to like going on rides.
Posted by A Valdese Blogger at 5:16 PM

"She also doesn't like it if I go too fast - apparently it makes her sneeze."

Oh dear lord, that did make me laugh!

A dog in a truck with the windows down, nothing better than that.

She is a beautiful dog. Sounds like she has a great personality and keeps you in line! LOL

Grace: I think she gets too much air up her nose.

Karen: Thanks - she is beautiful, but then I'm biased. She's funny sometimes.