Sometimes I wished I hadn't sold something. 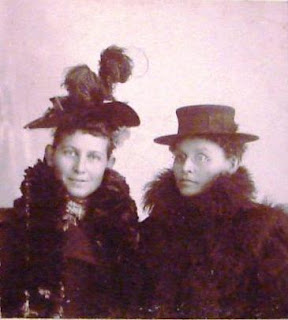 We sold this picture on eBay today.  I dutifully packaged it up and shipped it off, wishing all the time that I'd kept it, put it in a frame and stuck it on a wall or put it on a shelf somewhere.

Of course it was not a large picture.  It had a cardboard backing (I cropped it out for this post), and well over a century ago someone trimmed the backing down to a size where it would fit in a CDV album.  It measured 2.5 X 3.75 inches in it's trimmed state.

Even though it was not a size where it would dominate a room or even a section of a wall, it was still an interesting, quirky little picture.  I find it sometimes happens that I don't realize how interesting something is until someone buys it.

These gals were young in this picture, in their 20's perhaps.  If they lived into their 80's, then they probably died in  the 1950s or so.   Young people would have looked at them and not have been able to imagine them ever being young.

There was a photographer name (Bautner) on the backing, but no other identifying information at all.  I assume these two will remain anonymous, and I really hope the person who bought this picture enjoys it.
Posted by A Valdese Blogger at 8:26 PM

...truly, the worth of a thing's only realized when it's already gone... :( ..but there's always a reason behind every loss... maybe a better one's coming to replace the old one...:)

I love the little smile on the woman on the left. She's up to no good.

linlah - I have since discovered that I have another picture of that very person, wearing the same outfit with the same sort of expression. May have been taken the same day, or cropped out of the original negative. Anyway, photographer information places that picture from Chicago.