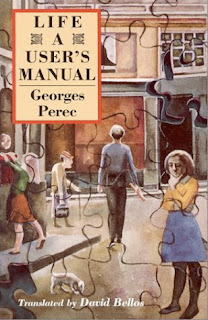 Well I've done it again.  This is the 2nd or 3rd time I've bought this book, and I know I read it all the way through once awhile back.  I plan on reading it again, but I know, once again, I'm in for it.

The basic setting is an apartment building in Paris, and the story jumps around from apartment to apartment, so you can see all the events happening simultaneously.  It is narrated in the 3rd person, by a person who apparently sees all and knows all about the occupants.  There is a lot of minutiae in this book.

In a traditional class bound European society, the residents of the apartment building probably would be considered middle class.  From my point of view, most of them seem very well off financially, but the distinction I guess is that most have some sort of employment. They have to work for their money, except for maybe Bartlebooth, who is apparently a wealthy British ex-pat.

As the stories unfold and things begin to take shape, you begin to notice that jigsaw puzzles play an important role in the "plot" such as it is.  Not the cheap machine made cardboard ones you can buy in the toy section of department stores, but handmade wooden ones, made by a craftsman, the kind where there is no picture on the box.  The kind made to order.  The kind where several pieces may fit perfectly with several other pieces, but only one is correct.  The kind with traps and tricks, where everything fits perfectly together and you're left with one last piece and it doesn't fit in the only remaining space.

I'm pretty sure I missed stuff the first time I read it.  But I do remember saying OMG as I approached the end.  Only this was in the days before texting and stuff so I said it out loud.

The only other time I've experienced an emotion of pure surprise and shock like that from a book was when I was reading the "World According To Garp" by John Irving, when Garp smashed into the back of a car parked in his garage, while his wife (I think) was engaged in an "act of adultery" in said parked car, resulting in just a little bit of castration to one of the participants.  I was reading this while sitting in a car in a parking lot waiting for the Killeen Texas public library to open, perhaps in a slightly altered state of reality, can't really remember, and I looked up and stared at the bricks, in unbelieving horror.

Well, this book is completely different, but it was the same feeling, except for the horror part.   This time I know what's going to happen, but I want to remind myself of the details.

It's not Kafka hard, but not really an easy read, at least not for me.
Posted by A Valdese Blogger at 9:45 PM

You make this sound very interesting...B&N does not have it as an ebook - I shall have to try elsewhere...

Grace: I think it's worth it.

I think the "World According To Garp" made everyone stop reading and contemplate the horror! OMG indeed!