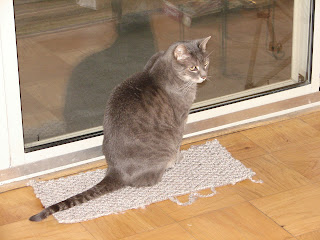 Snowchief the cat died yesterday.  He was between 18 & 19 years old.  The picture of him is from several years ago, a different place & different life, sitting on his favorite carpet scrap watching the goings on of the world.

I hate it when pets drastically alter their habits, it's frequently not a good sign.   About a month ago, Snowchief moved into the kitchen - more specifically into the dark cabinets under the sink.  He made a comfy place for him on a little shelf next to a bag of unions.  Patti moved the onions & moved out all the cleaning supplies, kept the area clean & I moved the litter box down to the kitchen.   A kitchen is really not a good place for a litter box, but we didn't think Snowchief would be able to make it to where we normally kept it.  So we brought it downstairs, and put it just a few feet from where he began spending most of his time.  He didn't seek out the sun anymore.

He ate, drank, used the litter box, slept and got weaker and weaker.  He vomited a lot.  He was loosing weight, losing patches of hair and was developing scabs on his back.  He was having trouble walking and one of his eyes did not look right, it looked cloudy.  We think he was in pain, but who really knows.  He seemed to be losing control of bodily functions.  It was obvious he wasn't going to live much longer.  We felt he was suffering & rather than let that continue we took him to the vet so it would end peacefully and painlessly.  We're both very sad about it.

Snowchief was a cat of course, and much of what he did was instinct.  He had no idea what was happening to him, he didn't know he was old or sick.  He had no conception of death (even though he'd killed enough mice in his time), and probably not even life.  Snowchief had been taken care of all his life, and had no idea that he was a lucky cat.  He was an animal, and he lived in the present, and had no knowledge of any different possibilities.

I was working for Electronic Data Systems at the GM Plant in Baltimore when the account admin brought in some 8 week old kittens that had been born under her deck.  That was the spring of 1992, the kitten that became Snowchief fit in he palm of my hand.  He grew to be a bigger than average cat.

I hate it when pets get old and die.  But if you have one long enough, that's what happens.
Posted by A Valdese Blogger at 10:58 AM

Oh, my dear. I am so sorry. Lots of warm comforting purrs to you...

Thank you for a tribute to our wonderful cat! I spent 5 years with him. Many, many nights he slept in the crook of my arm. I can't even speak of how I'll miss him, because watching him die was a long, drawn out process. I started letting go almost from the time he came to live with us, as he was 13 already. I never had a cat that lived longer than 15. Snowchief was a great spirit. You named him well.

I'm so sorry to read this. We just lost our precious Stinky two weeks ago. I know exactly how this feels. You're right that they don't know the end is near. All Stinky knew was that we were loving her as much as ever and I hope she knows how much we miss her.

Grace: Thanks! I had that ol' cat a long time.

Kathy: Sorry to hear about Stinky. These cats become part of the family & it's really hard to see them get old and weak.

I am so sorry Snowchief died. That was a long life! Pets add so much to our home but it hard when their time comes.

So sorry for your loss. I know how hard it is too watch a long time pet grow weaker from age and there is nothing you can do but make them as comfortable as possible till the end comes. We went through that with our Squeaker just two years ago, we had him from a kitten in 93'. I still find myself talking about him and at times calling out his name when yelling at Whiskers.