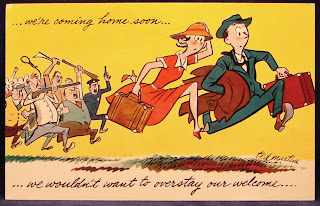 When it comes to our little eBay business, I don't like making decisions based on feelings.  I like to know.  That's why I keep track of a lot more things than normal, healthy, sane person my age or anybody else's might keep track of.   I have, because I've been keeping these detailed records for years now, the ability to spit out a lot of things, which may or may not mean anything.

I track 90 different postcard subjects & categories, and I can tell you which has sold the most for us this year.  I can tell where we've shipped to internationally, and which country spends the most in our store.   I can tell you the average price we've received per item sold and compare that to previous months or years.

Sometimes though I just don't know, and then I have to fall back on feelings.  I've found that my perceptions of how things are have about an equal chance of being right or wrong, so I don't like relying on perceptions.  But in this case I have to, because I've not kept any records.

I (and when I say I, I mean we)  sell postcards (& other stuff, but for now let's keep it to postcards) on eBay, I've gained a lot of experience over time & I've gotten better at it.  When I first started, I based pricing and such on my perception of another seller's practices, a seller who seemed to be having success.  I've moved way beyond that.  And I've become very aware of the competition and I do my best to compete.

I have noticed, or at least I have the "perception", that as a whole, with a couple notable exceptions, the competition has raised their prices.  That's good for me, because that means I can nudge mine up a bit, I guess.  I'm not sure why this is happening, or even if it is - I've not kept records on postcard prices on eBay. I'm not even sure how to.

If true, it could be because these old postcards are finite, there may be several of the same card floating around right now, but no one is making any more of them.  Also it's more expensive to to business on eBay these days than it used to be, so that could be a reason.  And it was my perception that buying postcards at some non-eBay sites was frequently a LOT more expensive than on eBay.

Maybe somebody knows if postcard prices are rising on eBay.  I've not really done the research.  It's just a feeling.
Posted by A Valdese Blogger at 8:17 PM