Stuff around the house #1 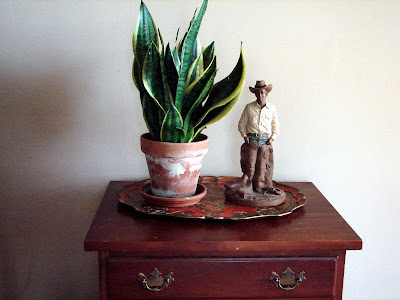 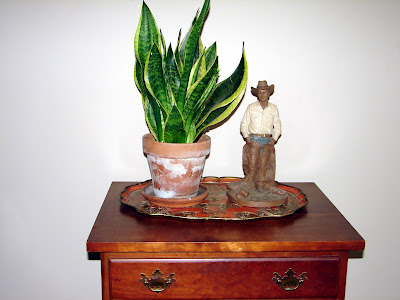 I've decided to do a new series of posts, at intermittent times (i.e., when I feel like it), of stuff around my house. This is the first one.
-
I have two pictures of the same thing because I couldn't make up my mind. One is with natural light, and the other is with flash. They both have things going for them. I prefered the natural light one at first, but now I'm not sure. The color's are brighter in the flash picture. Any thoughts?
-
In this picture is a signed figurine which we bought an an auction a year or so ago. Usually we'd resell something like this (it's what we do), but I like it, so we kept it, for now anyway. We bought the plant from a grocery store in Hickory, NC, and I'm not sure where the old planter came from. They are sitting on a wooden tray, which we also bought at an auction. The chest (or is it a dresser - kinda small for a dresser), is another auction item.
-
It's a stark little scene. I like it. This scene no longer exists, a few hours ago we moved a few things around. The plant and figurine are still together, but in a different location.
Posted by A Valdese Blogger at 6:47 PM

Usually I am all over natural light and the viewing pleasure of scenes, but I have to kind of agree with you here. Okay, I have to agree a lot with you here. I like the flash. I think it brings out the objects colors a lot better, especially the wood of the dresser and the green of the plant, which make the entire quartet of objects much more appealing to the eye.
Even if I'm not in to cowboy figurines.

They're both good pictures, but I think I prefer the natural light picture. Even though the colors are more muted, I like the shadows on the wall to the left.

I like both pictures too, but the natural light is my favorite also. It lends an organic beauty to this pic. Love your idea of pics from around the house.

Thank you all for your comments. I really couldnt decide, that's why I posted both pictures. In the natural light picture, the colors are more muted, it seems like its calmer or more subdued. And I like the way the vase looks. It's pleasant. In the flash picture, the richness of the colors come out, and the shadows go away. You can see the detail a lot better, & there's a lot of detail to see - like the wood of the dresser (which is very nice), the blue in the jeans, the green of the plant. I like'em both, for different reasons. Thanks again, kilandra, Beth & Dori for your thoughts. There'll be more posts of this nature before too long.

I like the natural light better 'coz there are no harsh shadows :)