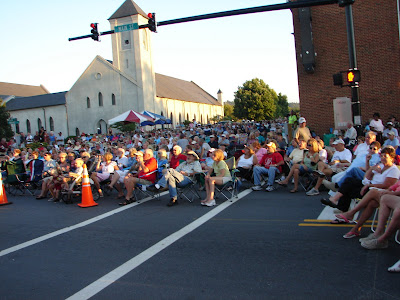 The Waldensian festival in Valdese was August 9th this year. But the most interesting time was the day before, the Friday evening when they closed down main street, set up a stage on the corner of Main & Roderet (right by Cornerstone Antiques), and closed off the rest of main for the Friday night "drive in" - a vintage/antique car show held every Friday night during the "warm" months. Since this is North Carolina, the warm months may be a bit longer than somewhere up in the frozen north. The picture to the left was taken the evening of August 8, and the crowd is gathering in anticipation of music to come. The large building to the left is the Waldensian Church. The building directly across the street is Wachovia Bank. The picture was taken from in front of Cornerstone Antiques, by none other than our very own Patti Anne.
-
Valdese started life as a religious colony of sorts. Here is a little history. Keep in mind, there are a lot of good sources for a history of Waldensians, or Valdese, and this blog is NOT one of them. But I'll tell you what I think I know. The Waldensians were a religious group, followers of Peter Waldo, and started, I believe, in the 12th century. They had beliefs that ran contrary to the theology of the Catholic church - one of which was they wanted to read & interpret the bible for themselves, rather than have it interpreted for them by the Church. This made them dangerous according to the thinking of the time, and also made them protestants long before the likes of Martin Luther. They were persecuted for centuries. Waldensians could be found all through central Europe. The group that founded and settled Valdese came from the Italian Alps, and spoke Provencal - a dialect I've probably misspelled, and I doubt most people could understand.
-
Sometime in the 19th century, the King of Italy decided to stop killing these people, and they prospered. Also, their population ballooned, and there was no longer enough land, so they began to establish colonies in other countries. One group bought some land in Burke County, NC, east of Morganton, and established a colony in 1892. Life was not easy, and they had to make some very quick adjustments. I think one of the first things they did was build a church - that large grey building in the picture. Originally the church owned the land, but eventually the communal experiment gave way to private ownership - the church selling the all the land to its members. What resulted is Valdese - a nice little town, with a lot of nice features, and an interesting history.
-
To this day I think there may be a two tier social strata in Valdese. The Waldensians, descendants of the original settlers, have names like Pasqual, Pons, Gigou (sp), and a lot of them are prominent in the community. There is a Waldensian cemetery & church (associated with Presbyterians), a heritage center, a museum and so on. The non-Waldensians have names like Ritchie (oops there goes my secret identity), and just thought it looked like a nice place to live. I only know this because people have told me. I'm pretty much oblivious to Valdese society, so whatever social strata exists is fairly irrelevant to me.
-
Anyways, back to Friday night. In the picture above, there is a crowd of people gathered before the music starts - its larger than it looks too, cause there were a lot that weren't in the picture. The entertainment that evening was by a band called "The Tams" out of Atlanta. Look closely at the crowd. One thing you can say about the good people of Valdese, is that for the most part, for lack of a better description, they are white. The Tams, was anything but white. So I wondered how this would go over with the crowd, 'cause it seemed to be a mountain/bluegrass/country/classic rock type of crowd at best. I didnt attend most of the concert - I was helping out at Cornerstone Annex (Myra's General), but at 9 PM or so, when I walked back up there, the place was jumping. A lot of the crowd were on their feet, they were closer to the stage, and moving around. I don't know if it was the same people or not - I have a suspicion at there was at least some turnover, but the whole place was packed. The band was loud, was quite good, and people seemed to be having fun. This was all Friday the 8th.
-
The next day, Main Street was closed again, with booths set up for several blocks, people selling things. I bought a face jug (look up Catawba Valley Pottery to see what I mean), and a couple of very good BBQ sandwiches from Myra's, and helped Patti out once again at Myra's General. It was fun walking up and down seeing what people were selling. There was music all day long, but no where near the crowds of the previous evening. It was a beautiful day - and about time. In 2006, it was virtually rained out, in 2007 it got to be over 100 degrees (F). Politicians were out in force, it being national & congressional elections and all. It was fun, but compared to Friday, a little on the sedate side.
-
This is the extent of my Waldesnsian Festival Observations.
Posted by A Valdese Blogger at 2:05 PM

Hello,
I'd like to get some fresh and accurate information on the use (or historical use) of Provençal language in Valdese. May we discuss this by mail?
JF