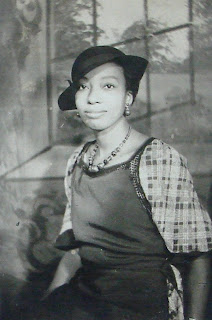 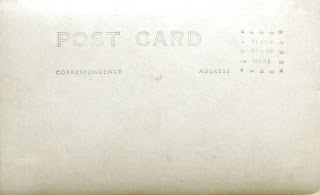 First, I can never figure out if its "postcards" or "post cards".  I've seen it both ways, and I've not been consistent myself.

Its a small thing.

Real Picture Postcards (RPPC) are photographs that were developed on postcard paper.  You put a stamp on them and mail them.  Many were formal pictures taken in a studio, but a lot were the equivalent of early snapshots.  When I think of an RPPC, I usually am thinking of a one of a kind personal picture that was usually kept or sent to family or friends.  That's not always the case - many were mass produced.  I prefer the "one of a kinds".

The example above was a formal studio photograph taken of a young woman a long time ago - based on the cards it came with, she may have lived in the Detroit area, but that is just a guess.  The back of the card looks pretty much like a normal postcard, but what is interesting about it is the stamp box.  On RPPC's the stamp box gives a clue to its age.  This stamp box, an "AZO" with a filled in box on each corner,  is classic.  I do not have my handy dandy chart available, but I believe this particular stamp box indicates the card was created sometime between 1925 and 1942.  At first glance, it looks closer to 1942 to me.

Whenever I have an RPPC I spend time looking at it, looking for details.  Trying to get a glimpse of a life, or of how things were a long time ago.  It's a little harder with the formal portraits, but I do it anyway.  This person is dressed quite nicely, and the one thing I notice is the necklace and the earrings.  Today they would be considered very retro or vintage if not antique, and I've seen necklaces that look very much like that for sell in antique malls and such.

RPPC's are highly collectible, people love them.  The ones that have brought the highest prices for us have been of geographic areas - something identifiable, but not necessarily a tourist area. I just now realized that our two best sellers (money wise) were of rivers:  an RPPC of a building on the Russian River in California sometime in the 1920s, and one of the Ohio River near Louisville, Kentucky,  frozen over during the winter of 1937.   I spoke to my father about that one, and he said that the Ohio River hasn't frozen over in decades - too many chemicals in it.  Both had white hand-written captions on the front.

RPPC's are my favorite type of postcard.  It's a lot of fun to just imagine what is going on in them, what the people are like, what the life was like.

Your Number One Fan said...

Your postcard articles are wonderful!

Hi... I came here via Sheila's interview. I must say that I am a greenhorn when it comes to collecting postcards even if I started this as a hobby when I was little. I don't know much but visiting blogs like yours is very helpful and informative. I have taken a lot of nice photos of Cambodia and have thought about turning them into postcards but there are no postcard paper available here... too bad. Anyways, thanks for sharing a wonderful post. I took the liberty of adding your blog in my list... I hope you won't mind :)